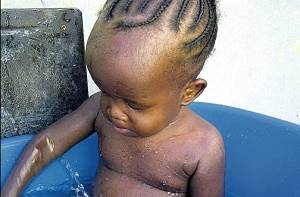 ELEVEN-MONTH-OLD Omar Lindo, who was shot and killed by criminals in downtown Kingston early last month is to be buried tomorrow.

Mother of the slain child said Omar’s funeral service will be held at the North Street Seventh-day Adventist Church at 2:00 pm.

The toddler was killed by a gunman who was pursuing another man on the morning of April 6.

Police report that around 11:20 am, a man was standing on Chancery Lane when he was attacked by another man armed with a gun.

Reports are that the man, in a bid to escape, ran into a yard. The gunman, who was in hot pursuit, fired several shots at the man.

Lindo, who was being bathed by his mother in the yard, was fatally shot during the attack. A six-year-old child was also shot and injured in the incident.

A week after the incident, a 17-year-old boy was arrested in connection with the murder.

Police said the suspect was held in an operation in Courage District, Gordon Town, St Andrew.