19 YO SHOT AND KILLED IN MAXFIELD

Police are investigating the death of a man whose body was found with multiple gunshot wounds at an empty lot on Berwick Road in the Maxfield area early Tuesday morning.

The deceased has been identified as 19-year-old Oraine Daley also called “Big Big” of a Kingston address.

Reports from the police are that Daley and two friends were heading home from a street dance in the area when they were pounced upon by gunmen.

Daley’s companions managed to escape on foot but he was reportedly dragged to a nearby gully and shot dead. Residents reported hearing several explosions just before midnight. 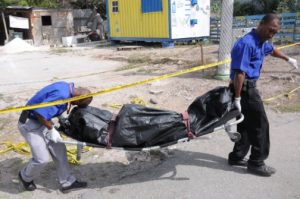 It is alleged that the assailants then hauled Daley’s body to the open lot where it was discovered by residents around 7:00 am.

8 thoughts on “19 YO SHOT AND KILLED IN MAXFIELD”