2 CHILDREN MAY NOT BE FOR HER HUSBAND 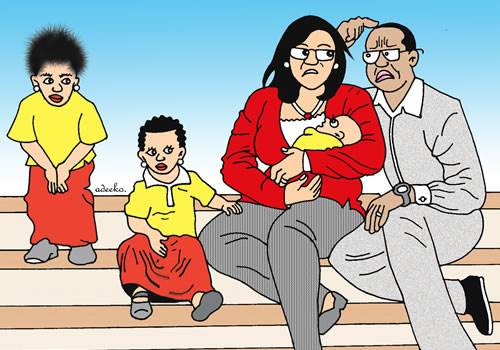 Dear Taiwo,
MY life is in a mess, a mess I created by myself. It is not something I am proud of, or something I can walk up to any one and talk about, not even my mother, who is the closest person to me on earth, that is why I would love to remain anonymous, but I sincerely, need your help.

My husband and I have been married for over 18 years, we waited on the Lord for about six years before our first child came after which our second child followed almost immediately.

We agreed that we would stop at two, because of our age, considering the fact that we both married late.

Along the line, however, I became pregnant, of course, I couldn’t have opted for an abortion. We decided that I should have the baby, but unfortunately, I was unable to carry the pregnancy to term, I lost the pregnancy at five months.

If it was the will of God for us to have two kids, it was also okay by us. I erased the thought of another baby from my mind and concentrated on taking care of the two children.

Early last year, my husband’s cousin and best friend visited the country from Russia, he stayed with us throughout his four-month stay in the country. Both of them are very close, so his wife and I had no choice than to be close too. When she learnt that he would be staying with us, she told me that this decision gave her peace of mind.

Along the line, my husband had to go on a business trip to US, he also said he was confident and happy that he would be leaving the kids and I in good hands. We were like a big family and there was no cause for alarm, until the devil did its worst.

On one of the nights when my husband was away, I had malaria, I was so weak that I couldn’t make dinner. When my (Uncle Dee), (that’s what the children call him) came back, the children told him I was resting because I was ill. It wasn’t out of place for him to come into the bedroom to see me, which he did.

He offered to take the children out for dinner and also got me something to eat. After taking the malaria medication, it was expected that I should be up and doing by the following day, but unfortunately, I became worse.

I couldn’t even get out of bed to go back to the hospital, I was very weak. Uncle Dee went out very early in the morning, so he wouldn’t have known what was wrong with me. It wasn’t out of place that I had to call him at about noon so that he would help me to the hospital.

When I returned from the hospital, he did exactly what my husband would have done, of course the children could not go to school, he made sure that the children ate and went out again.

He came back home late and a little drunk, which was quite unusual. He came into the room to check on me, one thing led to another, Taiwo, we had sex. I cannot say I was raped, because he didn’t force me. I honestly could not explain it, but it happened after which he pleaded with me that such would not happen again. I cried my eyes out which made me more sick and I eventually landed in the hospital.

I was still on hospital admission when my husband returned from his trip. Like every husband and wife we made love when I returned home. I tried my best to forget what happened between Uncle Dee and I, I didn’t tell my husband.

When he finished his assignment, Uncle Dee went back to his life, family and job in Russia and two months after, I discovered I was pregnant again. Although, it crossed my mind, but I felt my encounter with Uncle Dee couldn’t have resulted into pregnancy, because my husband and I made love several times after.

When my baby arrived, I was relieved because, though, our only son, he is my carbon copy, while the girls resemble their father.

Although, I still have my fears, but I was shocked to my bone marrow when our pastor requested to see me precisely three weeks ago. I went to see him, I almost fainted when he told me that my husband came to see him and narrated the strange dreams he’s been having.

He said my husband narrated to him that he has dreamt four times that he is not the father of out last born- our son. He confided in the Pastor that much, he has no cause to doubt my loyalty and marriage vows, he however, remained confused because the dream kept reoccouring.

According to the pastor, my husband does not want to cause any trouble at home, hence, the reason why he did not ask me. He went to see the pastor for prayer assistance and he told me that he was the one who suggested that I should be told.

0 thoughts on “2 CHILDREN MAY NOT BE FOR HER HUSBAND”