3YO KILLED WITH MACHINE GUN OVER ARGUMENT THAT BEGAN ON FB 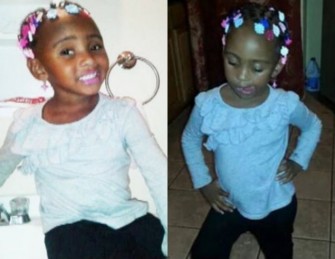 Police in Detroit have arrested four people they say were involved in a shooting in east Detroit that ended with four adults wounded and a 3-year-old girl senselessly killed.
Fox 2′s Roop Raj confirmed the arrests Friday morning just before a press conference with the latest information. Police also said they found the gun that was used in the shooting. Detroit Police say they worked through the night to arrest the four suspects and say they have arrested the one who pulled the trigger, killing the child.
Police Chief James Craig will hold a press conference Friday where they will provide more information. During the press conference, Craig said the final two suspects were arrested before 3:00 a.m. Friday and they recovered a machine gun
Amiracle Williams was with her parents at the intersection of Hayes and Mogul, north of Outer Drive, Thursday afternoon when the tragedy began to unfold. The 3-year-old was hit by gunfire and was taken to the hospital where she was pronounced dead.
Her father, 40, and mother, 36, are recovering at an area hospital. Her father is in critical condition. Amiracle’s aunt said the child’s mom is expected to recover.
According to police, it started with a fight on Facebook. After the online argument, a confrontation happened at Denby High School. That’s where the shooting started and it continued at the intersection where Amiracle was hit.
Police say a man and a woman are in custody but they’re searching for four other people involved. Several witnesses at the scene told Fox 2 that the group of six were just walking up the street before the shooting happened and one of them was carrying the gun. Police said the people they’re searching for are gang members.
“The shooting started at Denby and it was one victim,” Police Chief James Craig said. “(Police) responded and we got a report of shots fired in this block of Mogul. We found four victims of the shooting including a toddler that succumbed to her injuries. We concluded that the individuals responsible are gang members.”