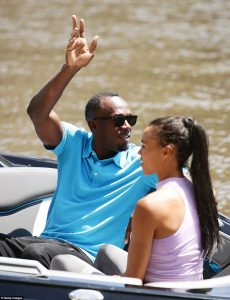 Take a look at these pictures on Daily Mail and check out some of the comments. Bolt has been in Australia for two weeks now.

SOME OF THE COMMENTS:

Wow she is stunning. What a smile

Usain Bolt the fastest man alive, still running from Cassie. Sooner or later your going to have to return to Jamaica to face her wrath for breaking her heart and publicly humiliating her over and over again.

Once could have been enough. She had time to leave him, no?

Cassie sticks around because of that money.

Good looking, charming man but boy, I wouldn’t touch him with a bargepole, the amount of women he has slept with, I’d be afraid I’d catch something.

Bolt has got one thing on his mind and it isn’t athletics ……. to be fair I don’t blame him