A READER ASKS IF THE MS UNIVERSE PAGENT IS RACIST 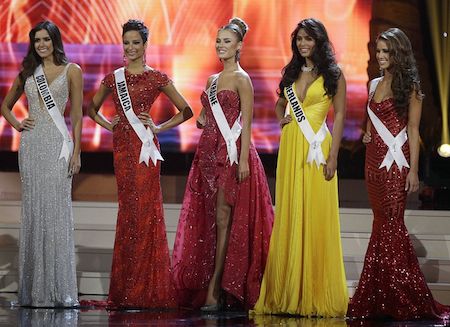 Dear Editor,
Admittedly, there were some gorgeous women competing in the recent Miss Universe pageant, including our very own Kaci Fennell — who did amazingly well! I agree with many that she should’ve won, or at least placed much higher than fifth.
These pageants are often laced with controversy, politics, stereotypes, and even mischief. I had concerns immediately upon noticing the lack of ethnic diversity on the judging panel. It was not surprising that there was not one black-skinned girl in the top 15 this year. And, if memory is correct, the same thing happened last year.
In the 63-year history of Miss Universe, only four black-skinned girls have managed to win the pageant. This year there were stunning afro beauties from Ghana, Guyana, Angola, Aruba, Turks and Caicos, Curacao, South Africa, yet none made it to advanced rounds of competition. And don’t tell me these girls weren’t smart or personable enough as national winners. Guyana, for instance, who is absolutely stunning, is nearing the end of her medical studies.
Black girls have to work twice as hard to get noticed, and they are rarely listed as favourites. Usually they have to settle with some arbitrary consolation prize, such as ‘most congenial’. Girls who don’t fit into the standard ‘look’ will have a difficult time. Not surprisingly, most winners are Latinos and Caucasian, and, of course, USA is almost always a finalist no matter what, the pageant being USA owned.
We know there are far more important things in the world, but one cannot deny these pageants are entertaining with strong commercial value as they are followed by millions globally and covered by all major news outlets. Multi-racial countries like Jamaica should never compromise principles to please Miss Universe. Countries sending black delegates need to stay the course, raise the bar and continue to hold their heads high, otherwise they should boycott this particular pageant.
At least Miss World, with its European base, seemingly has a more level field and a greater sense of purpose with its global charity work, which is why it attracts so many participants every year. Any country can win Miss World. Country franchise holders within the Miss Universe organisation need to be more vocal, they should speak up or pull out.
Jamaicans need not be bitter about Kaci’s Miss Universe loss. It may very well end up being her gain. I believe racial stereotypes and prejudices must be dealt with head-on a very principled, dignified and forceful response.
P Chin
chin_p@yahoo.com
ADVERTISEMENT