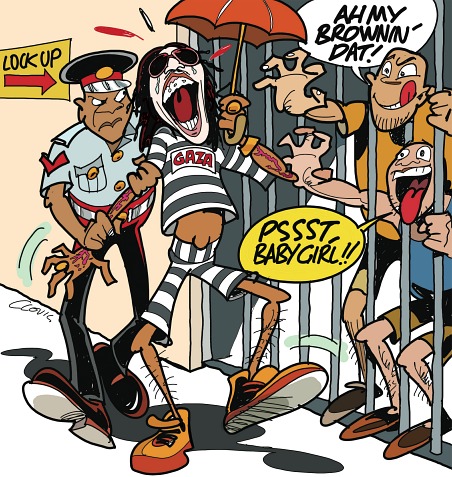 ADAMS… the jurors have done the country a favour

FORMER glamour cop Reneto Adams is advocating that convicted entertainer Vybz Kartel be locked up for no fewer than 50 years.

Adams, who expressed delight at the guilty verdict against Vybz Kartel for murder last week, said he bore no grudge against the artiste in particular, but said the country had been done a favour by the panel of jurors.

“I have been one of the voices crying out in the wilderness for criminals to be found guilty and locked up for no less than 50 years for heinous crimes.

The Jamaican people have suffered for far too long,” Adams told the Jamaica Observer yesterday. Vybz Kartel, whose real name is Adidja Palmer, along with Shawn ‘Storm’ Campbell, Kahira Jones, and André St John were all found guilty by an 11-member jury that voted 10:1 for the murder of Clive ‘Lizard’ Williams, who police say was killed at a house owned by Vybz Kartel on Swallowfield Avenue in Havendale, St Andrew, in August 2011.

Shane Williams was acquitted by the jury, but was subsequently slapped with another murder charge by police. “It is not just Kartel, but all criminal elements.

There have been certain judgements in recent times that give us hope. ‘Zeeks’, ‘Dudus’, ‘Dog Paw’, ‘Andem’ are all in prison,” he said in reference to former gang leaders Donald Phipps, Christopher Coke, Christopher Linton, and Joel Andem.

“I am very elated,” Adams remarked. During the trial of Vybz Kartel, defence lawyers pointed to evidence tampering and sloppy investigative work by some police officers and labelled the police force as corrupt.

Yesterday, Adams said that he was not pleased with some aspects of the claims, which he argued painted the police in a bad light. “I would describe it as horrendous the way certain exhibits and evidence were handled.

There can be no excuse for that type of thing when there are certain guidelines and rules relating to handling evidence and exhibits; some of which I helped to formulate. It is not pleasing at all,” he said. Vybz Kartel and his three co-accused be sentenced by Justice Lennox Campbell next Thursday.

Under Jamaican law they will have to serve at least 15 years before being eligible for parole, but will have to await Justice Campbell’s sentence to know how many years they will be locked up in a maximum security penal facility before a parole board decides that they are no longer a menace to society.