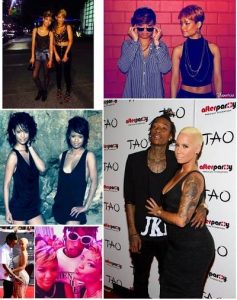 Scandalous new details emerged in the split between Amber Rose and Wiz Khalifa Tuesday, as a radio disc jockey with ties to the short-haired stunner claimed that “Amber walked in on [the rapper] with two women at the same time — twins, twin sisters, twin biological sisters.”
The twins linked to the “Say Yeah” rapper, according to Rosenberg, are fashion designers Jas and Ness Rose, who shared a shot with Khalifa — as well as other celebs such as Chris Brown and Christina Milian — on their Instagram page http://instagram.com/jasandness.
Hot 97’s Peter Rosenberg made the jarring claim in response to recent online reports that the “Black And Yellow” rapper, 27, had bedded women after he and the fashionista, 30, had called it quits.
“I think that’s an easy way to spin it now … [but] that’s just not true,” Rosenberg said. “Did they have problems? Absolutely.
“I believe from my relationship with Amber, that she knew they had problems, she knew he wasn’t happy — she wasn’t happy either — but she was also like, ‘He’s touring, he’s going through a lot, and at some point we’re going to work on this again’ … it’s a marriage.”
Rosenberg also blew off rumors that Rose was somehow romantically linked to Nick Cannon, calling them “nuts.”
He called the Philadelphia native, who shot to fame dating Kanye West, “a smart-ass, savvy businesswoman.
“She signed with Incredible, Nick Cannon’s company; she would never then sleep with the dude that she signed with.”
Rose last week took to Twitter to deny the Cannon claims, saying she “would never ever ever cheat on my husband in a million years,” but “unfortunately my now ex husband can’t say the same….”
As RadarOnline.com reported, Rose, citing irreconcilable differences, filed to divorce the rapper last week after more than three years together, and one year of marriage. She’s asking for sole custody of their toddler son Sebastian Taylor Thomaz, as well as spousal support, based on the prenuptial agreement they drew up.