Ryan Lochte and three of his U.S. Olympic swimming teammates fabricated the story about being robbed at gunpoint that became international news at the Rio de Janeiro Games, according to ABC.

Video shows the U.S. swimmer “breaking down” a bathroom door and “fighting” security at a gas station around the time the robbery allegedly occurred, per ABC News correspondent Matt Gutman. 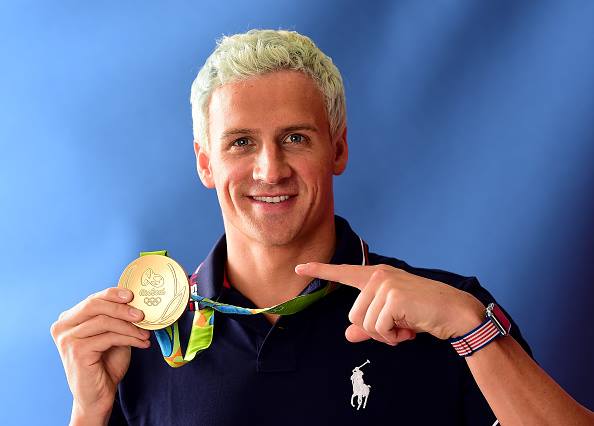 American swimmers Gunnar Bentz, Jack Conger, James Feigen and Lochte claimed to be victims of an alleged armed robbery of their taxi cab en route to the Olympic Village on their way back from a party at the French hospitality house early Sunday morning, according to the U.S. Olympic Committee.

Lochte returned to the U.S. on Monday. However, Brazilian police grew skeptical of the swimmers’ accounts in the days following the alleged robbery, and a judge ordered search and seizure warrants to further question the U.S. swimmers. Conger and Bentz were reportedly removed from their flight home by Brazilian authorities on Wednesday night. Feigen also reportedly remains in Brazil.

As authorities rounded up his teammates in Rio, Lochte tweeted the following about his silver hair:

During multiple interviews with members of NBC’s Today show, Lochte has stood by the robbery story.

“We got pulled over in our taxi and these guys came out with a badge, a police badge,’” Lochte told the Today show’s Billy Bush in a taped interview Sunday. “No lights, no nothing, just a police badge. They pulled us over, they pulled out their guns. They told the other swimmers to get down on the ground. They got down on the ground. I refused. I was like, ‘We didn’t do anything wrong,’ so I’m not getting down on the ground. And then the guy pulled out his gun, he cocked it, put it to my forehead and said ‘get down. I put my hands up. I was like ‘whatever.’ He took our money, he took my wallet.”

Speaking with Today host Matt Lauer Wednesday, Lochte reiterated, “We wouldn’t make this story up. We’re victims in this and we’re happy that we’re safe.” However, the six-time Olympic gold medalist altered details about his original story during Wednesday’s conversation with Lauer, saying the they stopped at the gas station to use the men’s room and the gun was pointed in his “general direction.”

Bentz, Conger and Feigen are all cooperating with Brazilian police, according to the USOC. Meanwhile, International Olympic Committee spokesman Mario Andrada issued the following strange statement:

“I do not regret having apologized. No apologies from him or other athletes are needed. We have to understand that these kids came here to have fun. Let’s give these kids a break. Sometimes you make decisions that you later regret. They had fun, they made a mistake, life goes on.”