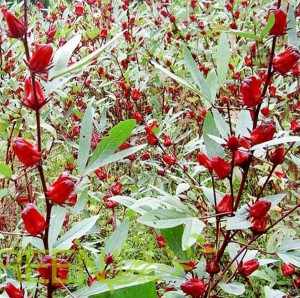 ANANCY AND SORREL
Short Stories | Comments Off
ONCE UPON a time, Christmas Eve morning, it was Grand-Market morning and Bredda Anancy stood by his gateway watching all de people going down to market. The basket on their heads and the hampers on the donkeys were laden with fruits and flowers and ground provision. Anancy called out: ‘Happy Grand-Market, everybody.’
‘Thank yuh, Bredda Nancy,’ replied the people.
Anancy said to himself: ‘Wat a crosses pon me. It look like seh everybody pick off everything off every tree an carry gone a Grand-Market.’ Anancy groaned as a cart-load of oranges and grapefruits went by. ‘Amassie me massa , dem don’t lef a ting ina de fiel fi me scuffle!’
Anancy waited until everybody had passed on their way to the market, then he went from field to field in search of scufflings.
‘Wat a hard set a people, sah!’ Anancy grieved. ‘Dem clean out everyting outa de fiel dem – not a chenks a scufflings fe me.’
Suddenly Anancy exclaimed: ‘Wat a sinting soh red!’ And he broke a long stalk of a long red plant and held it to his nose. ‘It don’t got no smell,’ said Anancy, ‘but it pretty fi look pon. I wonder wat it good for?’
Anancy picked a few more pieces of the red plant and stuck them in his trousers waist, mumbling to himself, ‘Well since yuh is de only ting I can scuffle, I am scuffling you, red sinting. I don’t know what I am going to do with yuh yet. I don’t know if yuh can eat, but I might even haffi eat yuh!’ Anancy laughed: ‘Kya, kya, kya, kya.’
He danced and sang all the way to the Grand-Market. When he got there Anancy looked around at all the beautiful stalls full of fruit kind and cooked food and food cooking. Anancy said to himself: ‘I will have to work up my brains an fine a way to raise something.’ He stopped in front of a stall with plenty of oti-eati apples, pointed to the red plant in his trousers waist, and said to the stall keeper: ‘Hi missis – swap me some a fi-you red tings fi some a fi-mi red tings.’
The woman asked him: ‘Wait fi you red tings name? Anancy seh: ‘Swap me firs and I will tell you.’
The woman replied: ‘Tell me firs and I will swap you.’
Anancy seh: ‘Swap me firs.’ The woman seh: ‘Tell me firs.’
The man in the pumpkin stall next to the woman’s oti-eati stall shouted: ‘Missis, if you want de red tings why you don’t jus grab it away from the lickle man?’
Anancy laughed: ‘Kya, kya, kya,’ and shouted back, ‘Grab it if you bad!’
The man grabbed after Anancy. Anancy said: ‘Slip!’ and ran. The man chased Anancy through the market. Several people joined in the chase, shouting: ‘Tief! Tief! Tief! Catch the tief!’ Anancy kept slipping them,`darting in and out of stalls until he reached the hominy stall.
The hominy lady had a big jester-pot full of boiling water on the fire. She was just about to drop the hominy corn in the pot when Anancy flung the bundle of red plant into the water. The hominy lady screamed: ‘Wat dat yuh trow into me pot?’ The crowd rushed up to the pot. One man exclaimed: ‘It red like blood! It fava wine!’
Anancy looked into the pot and laughed: ‘Kya, kya, kya, kya. It don’t only look like wine,’ he shouted, ‘is wine!’ Anancy mumbled to himself: ‘Poor me bwoy, ah hope is not poison.’
The man who had started the chase rushed forward, grabbed a spoon and tasted the liquid. He made up his face and said: ‘It don’t taste good.’
Anancy said: ‘It don’t finish brew yet:
It want some sugar,
a little piece a ginger
A little cinnamon
And then you stir so
And then you stir so.’
And Anancy took a little of all the spices from the hominy lady’s stall and threw into the pot. Anancy tasted the brew. ‘Kya, kya, kya,’ Anancy laughed. ‘It taste nice like real-real wine.’
The hominy-lady said: ‘It smell nice.’
Anancy looked fondly into the pot and whispered in wonderment:
‘How you so real, so-real, so-real!’
Somebody in the crowd shouted: ‘It name so-real’
The crowd took up in chorus: ‘Truppence wut a so-real. Truppence so-real!’
Anancy brewed and sold so-real all day; it was the most popular drink at the Grand-Market. By the end of the day, in true Jamaica fashion, so-real had become sorrel. And from that day to today, sorrel is a famous Christmas drink. Is Anancy meck it.
Jack Mandora, me noh choose none.

2 thoughts on “ANANCY AND SORREL”