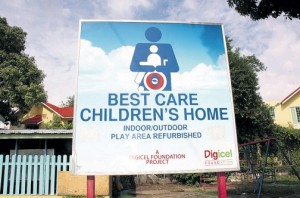 BY the start of next year the Best Care Children’s Home, one of the places of refuge in Kingston for homeless children, wards of the State and children with disabilities, might be forced to close its doors because of a $3-million deficit that it has been unable to clear.
According to Orville Johnson, chairman of Best Care Foundation, operators of the Children’s Home which houses 46 children and a special needs school which is located at 11 Tremaine Road, the administrators fear if they are not assisted soon, they will have to close the property as they are not able to find the funds needed to pay their current debt and fund the budget for 2015.
“We are in a very difficult place and the future of the home is now very much up in the air. For 2014, we have a budget of $24 million to run the home and another $6 million to run the school, so in all we have a budget of $30 million to fund. The only guaranteed funding we have is from the Ministry of Youth & Culture through the Child Development Agency. We get a subvention which amounts to just over $1 million per month. That $12 million to $13 million is still shy of what we need to finance the home, so we have to struggle to find the rest of the money. Right now, it is very difficult for us to pay salaries and buy food,” Johnson, who has been working with the home for the last 32 years, told the Jamaica Observer last week during an interview.
“This year has been particularly difficult because the money has been very hard to come by. We have a situation where we are building up a deficit because the subvention from the Government is far from sufficient. We have not had an increase in two years, and we are now in an almost unsustainable position, as the deficit for the year is around $3 million and climbing,” Johnson further stated.
Administrators have been seeking funding from other sources, but the donations they receive are still insufficient to sustain the operation, Johnson said.
“I started with the home in 1982, and in former years, things were better. We used to get funding from the Government of maybe 70 per cent, and then our fund-raising efforts and sponsorships were enough to help us get by, but now, we have a chronic situation where we have statutory payments to make and we cannot pay them,” Johnson told the Observer.
“One of our major
fund-raisers is an annual dinner. We had to cancel the dinner for the first time in July, because there was just not sufficient sponsorship to make it feasible, and we did not want to run the risk of putting on the project and losing more money,” Johnson said.
According to Johnson, the next annual fund-raiser for the home is ‘Come Mek We Laugh’ which was held yesterday.
He is hopeful that the event, which has been in existence for the last 10 years, will be profitable and help clear some of the debt.
In addition to the financial challenges that the home and special needs school faces, Johnson told the Observer that one of their major challenges is the fact that, after 20 years of age, wards of the state, with disabilities which they nurtured, failed to become employed, remain at the home and they have to care for them into adulthood.
“A number of them (wards of the state) have been with us for a long time. Some of them are not children any longer. The oldest one is in the 30s. Some of them are big now. There is nowhere else for them to go, so we take care of them as best as we can, which is one reason we started our special needs school years ago to make them employable in the future,” Johnson said.
Johnson is pleading for assistance from the Government, members of the private sector and public sector who can assist the home in clearing the debt and not allowing the dream of Enid Smith, who started the children’s home over three decades ago, to go in vain.
“We are grateful for all the assistance we get, especially during the festive season. However, we need long-term assistance to remain operational,” he said.
Contacted on Saturday, Minister of Youth and Culture Lisa Hanna said that she was not informed by Johnson of the challenges that the Best Care Children’s Home currently faces.
She said that she needed time to investigate the matter and speak with Johnson before commenting further.
ADVERTISEMENT