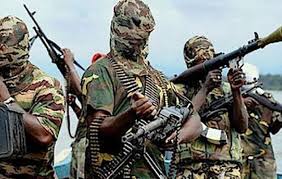 (Reuters) – The latest big Islamist attack in Nigeria has killed least 125 people, police said on Wednesday after gunmen rampaged through a town in the northeast, near the Cameroon border.

Details emerging of the scale and ferocity of Monday’s massacre in Gamburu underscore how far Nigerian security forces are from protecting civilians in a region where U.S. experts are preparing to help find and free 200 abducted schoolgirls.

Scores of gunmen whom police suspect were from Boko Haram, the al Qaeda-linked group that seized the girls in the same region last week, surrounded Gamburu before dawn on Monday. They sprayed automatic gunfire around the market town, which was crowded with traders gathering before the heat of the day.

Witnesses said they burned down houses and, in some cases, slit people’s throats. A police officer assessing the scene on Wednesday said the death toll had reached at least 125.

Demanding an Islamic state, Boko Haram has been fighting in the northeast for five years but attracted renewed global attention last month with the abduction of girls taking exams in the village of Chibok, also in the south of Borno state.

This week, the United States said Nigeria had accepted an offer of military and civilian experts to locate and recover the 200 or so captives. Britain is also sending a small team and France has also offered assistance.

The international attention has added to pressure on the government to show it is working to protect civilians. Police offered a $300,000 reward on Wednesday for tip-offs, listing six phone numbers for anyone with “credible information” to call.

The kidnappings and numerous other attacks by Boko Haram have overshadowed Nigeria’s hosting of a World Economic Forum, starting in the capital Abuja on Wednesday. Nigerian officials had hoped the event would draw attention to the potential of Africa’s biggest economy as an investment destination.

A witness to the Gamburu attack, Talatu Sule, said she survived by hiding at home with her children. Afterwards, she went out with the police team to see the devastation.

“I counted 85 dead before I lost interest in counting. This is horrible,” she told Reuters by telephone. “They burned vehicles, cars and 17 trailers loaded with cows and grains in the market.”

A police source said there may be more bodies beyond the town in the bush or in the rows of charred houses.

Public anger mounted after locals on Tuesday said another eight girls had been seized from the same remote northeastern area by suspected members of the group.

Boko Haram leader Abubakar Shekau has threatened in a video to sell the girls abducted on April 14 from a secondary school in Chibok “on the market”.

Last month’s kidnapping occurred on the day a bomb blast, also claimed by Boko Haram, killed 75 people on the outskirts of Abuja, the first attack on the capital in two years. Another bomb in roughly the same place killed 19 people last week.

President Goodluck Jonathan welcomed the U.S. offer to send an American team to Nigeria to support the government’s efforts to find the girls.

U.S. President Barack Obama said the kidnappings “may be the event that helps to mobilize the entire international community to finally do something against this horrendous organization that’s perpetrated such a terrible crime”.

The ruthless Islamic terrorist behind the kidnapping of hundreds of Nigerian schoolgirls is believed to be holed up in abandoned military bunkers deep inside a remote forest eight times larger than Yellowstone and teeming with “wicked and poisonous” snakes.

The dreaded Sambisa Forest, a game reserve in the northeastern part of the embattled nation, provides bloodthirsty Boko Haram leader Abubakar Shekau safe haven from Nigeria’s security forces, many of whom are said to be afraid to venture into the wooded no man’s land. The shadowy leader, his army of jihadist fighters and 276 teenage girls he vowed to sell into slavery or as child brides are believed to have melted into rugged wilderness. The girls are to be sold for as little as $12, according to reports.

The Nigerian government has reached out to the United States for help in hunting down the terrorists and has offered a $300,000 reward for information leading to Shekau’s capture. But catching the continent’s most-wanted man will require venturing into the 23,000-square-mile Sambisa, whose dangers have taken on mythical proportions. With confidence in Nigerian authorities completely eroded, local residents have reportedly pooled money for motorcycles to head into the forest in search of the girls missing since last month’s abduction, as well those who have been abducted since. At least two of the girls have died of snakebites, and roughly 20 others are believed to be ill, according to an intermediary.

Shekau made his evil plans clear in a video released Monday, in which he gloated about the kidnappings.

“I abducted your girls,” Shekau said, in an hour-long video that opens with fighters shooting guns into the air and shouting “Allahu akbar!” “By Allah, I will sell them in the marketplace.”

Shekau’s army is estimated to number from a few hundred to a few thousand fighters. The U.S. has offered to send a team to Nigeria to help the search efforts. A senior federal law enforcement source told Fox News that although the FBI has a permanent presence in Lagos, Nigeria, it’s “still unclear, what, if any” supplemental resources are being provided by the FBI. The FBI’s elite Hostage Rescue Team is not in play at this time, the source said.

The forest’s thorny vegetation is 6 feet high in some places, impenetrable without the use of heavy cutlasses to chop trails. According to locals, the wilderness was a primary grazing grounds for stray elephants from central Africa as a game reserve before 2006. It’s now believed that Boko Haram could be hiding in bunkers here previously used by the military to protect the indigenous residents of the region.

In recent days, Boko Haram has raided villages in and around the forest, including a raid Monday night on a village near the border with Chad, in which eight more girls were kidnapped.

Umar Maryah, a professor at Nigeria’s University of Maiduguri, told The Guardian that the forest hosts a large population of wildlife, including giant crustaceans, monkeys, antelopes, lions, elephants and ostriches.

Boko Haram militants are reportedly well-versed on the enormous forest and would likely see any military approach long in advance.

“It actually took the intelligence services a long time to discover that the game reserve had become a hideout for the sect,” one source told The Nation. “They waited three years until several lives had been lost before acting reluctantly on the intelligence advises … As a matter of fact, Sambisa is not the only hideout of the insurgents.”

The young hostages will be tactically transported from one base to another, typically during the cover of nightfall, to avoid detection, the source added.

Meanwhile, little is known about the group’s notoriously vicious leader. Shekau — who is believed to be as young as 36 or as old as 45 — was reportedly Boko Haram’s deputy leader until its founder, Mohammed Yusuf, was killed in a massive crackdown by local authorities in 2009. Shekau was initially thought to have also been killed during those attacks, but he later surfaced in a video claiming to be the terror group’s new director.

The U.S. Department of State is offering a reward of up to $7 million for information leading to Shekau’s location. In 2012, he was declared as a “specially designated global terrorist” for numerous bombings, including the August 2011 attack on the UN office complex in Nigeria’s capital, Abuja, that killed 23 people and injured dozens more.

Shekau, according to a BBC profile, is known as a “fearless loner” with a photographic memory, a complex and often paradoxical man whom is part intellectual, part terrorist. His nickname — Darul Tawheed — translates as a specialist in Tawheed, or the concept of monotheism in Islam.

“He hardly talks,” one journalist, Ahmed Salkida, told BBC. “He is fearless … He is one of those who believes that you can sacrifice anything for your belief.”

Shekau does not speak English, but is fluent in his native Kanuri, Hausa and Arabic languages. He reportedly does not even communicate directly with the group’s soldiers.

“A lot of those calling themselves leaders in the group do not even have contact with him,” Salkida told BBC.

Shekau, according to those who study the group, is known for being particularly brutal.

“I enjoy killing anyone that God commands me to kill — the way I enjoy killing chickens and rams,” he said in a clip released in 2012 after an attack in Kano, Nigeria, that killed more than 180 people.

In addition to being the group’s militant leader, Shekau also serves as its spiritual leader, Salkida said.

“He has a photographic memory and is well versed in theology,” he told BBC.

Meanwhile, on Wednesday, as many as 300 people were killed when extremists attacked the town of Gamboru Ngala on Nigeria’s border with Cameroon, according to local reports. The attack and hundreds of casualties were confirmed Wednesday by Borno state information commissioner Mohammed Bulama who spoke to The Associated Press by telephone Wednesday. Shops and homes were set ablaze and razed in the attack, he said.

Nigerian federal Senator Ahmed Zannah said the attack lasted about 12 hours, according to the newspaper. The insurgents set homes on fire and gunned down residents who tried to escape from the flames. Zannah blamed fighters of Nigeria’s homegrown Boko Haram terrorist network that has claimed responsibility for the kidnapping of 276 teenage girls and is threatening to sell them into slavery.

Boko Haram’s five-year-old Islamic uprising has claimed the lives of thousands of Muslims and Christians. More than 1,500 people have died in their attacks so far this year. The insurgents say Western influences are corrupting and they want to impose an Islamic state in Nigeria, a country of 170 million where half the population is Christian, The Associated Press reports.