Bolt who was running his first competitive race of the season, clocked 10.05 seconds (0.1m/s) to win at the Cayman Invitational, beating American Dentarus Locke 10.12 with Kemar Bailey-Cole third in 10.18 seconds and another Jamaican Jevaughn Minzie who was making his debut, fourth in 10.22 seconds.

Bolt got off to a good start and caught the field by 40 meters and then pulled away to win easily.

Powell who won the 200m at last week-end’s JII meet at the National Stadium, broke the meet record at the Meeting Athletisme Guadeloupe with a time of 10.04 seconds. 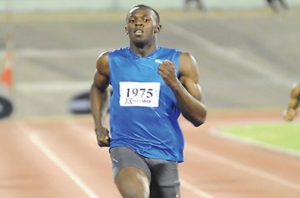