BOUNTY SEH SUMFEST SHOULD HAVE AN INTERNATIONAL REGGAE NIGHT

A galaxy of stars from the local music scene turned out for Wednesday’s launch of Reggae Sumfest held at Usain Bolt’s Tracks and Records in St Andrew.

Scores of artistes, some of whom are booked for the July 22-23 festival, were called upon to share their thoughts on the event, now headed by Downsound Records’ Josef Bogdanovich.

Perhaps the night’s most vocal was deejay Bounty Killer, who, while praising the festival, called for the resumption of International Night, which was axed from this year’s roster. 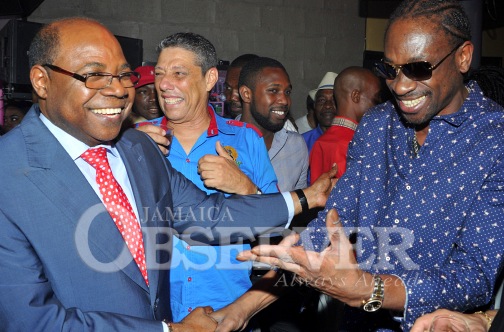 This year is a new direction and we have to leave room to ‘teethe’, so mi nuh want everyone gwaan like it nah go work. It started with we Jamaicans so mi nuh want nuh bad mouth ting. So, jus want the people fi come out and support. We not giving the music the real exposure what it must get in Jamaica,” said Bounty Killer in his presentation.
Bounty Killer’s sentiments were echoed by his former arch-rival Beenie Man.

“Everything that Bounty Killer said, I was going to say it. Sumfest is our show. After Reggae Sunsplash Sumfest pick up the slot that we can have an international stage so that people from all over the world can see what’s going on in dancehall. I only miss one Sumfest because I was on a world tour . Just want everyone to come out to see a great show… its gonna be a greater show this year,” said Beenie Man.

The festival was also given the thumbs up by reggae artiste Tarrus Riley and deejay Agent Sasco.

Bogdanovich, who recently assumed chairmanship of the 24-year festival, cut the event from three to two nights. He included an ‘all-Jamaican’ roster of acts, which is a sharp departure from the trend of injecting international acts.