Thousands of Brazilians launched angry anti-Olympics protests hours before Friday’s Rio Games opening ceremony in fury at political scandals rattling the host country and the billions spent on the event.

Waving signs reading “No to the Olympics!”, a crowd of about 3,000 blocked an avenue outside the luxury Copacabana Palace Hotel where many Olympic athletes are staying.

Guests with Olympic accreditation looked down from the hotel terrace at the protest.

Passing cars honked their horns, some in support for the protesters and others in anger at getting stuck in a traffic jam. 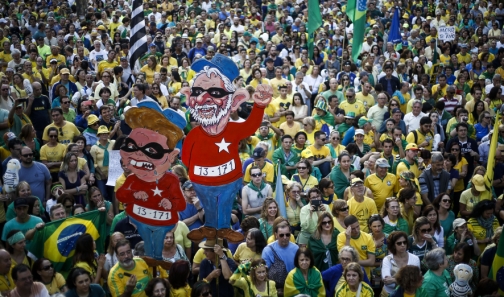 They booed and chanted as a limousine apparently carrying Olympic delegates passed.

The protest was the latest unwelcome distraction for Brazilian authorities and Olympic organizers ahead of Friday’s opening ceremony at the 78,600 capacity Maracana stadium.

The main target of the demonstration was Brazil’s interim leader Michel Temer, branded illegitimate by many Brazilians who say he mounted a “coup” against suspended president Dilma Rousseff.

Protesters also slammed the huge cost of hosting the Games in a country stricken by recession and inequality.

The country has spent more than $10 billion on new infrastructure and preparing for the Games at a time of economic crisis.

“I am demonstrating for democracy in Brazil. The world is watching so we are here to denounce the coup,” said one demonstrator, Iraci Franca, 57.

“It’s very hard right now in Rio state for education and health because of the lack of funds and non-payment of salaries.”

Protesters yelled for Temer to quit. He will be at the ceremony in the absence of Rousseff.

She was suspended pending an impeachment trial for allegedly fiddling state accounts. Her former vice-president Temer was one of the leaders of the impeachment drive.

“The coup in Brazil erases the Olympic spirit,” read one sign in English waved by demonstrators.

Dozens of police stood by without intervening as international media filmed the scene, near the iconic Copacabana beach.

“We want to take advantage when the world’s attention is on Brazil to denounce what’s happening, how we are on the path to dictatorship,” said one demonstrator, Ubiratan Delgado, a 59-year-old engineer.

“We’re not against the Olympics, it’s the criminal Olympics we oppose.”

14 thoughts on “BRAZILIANS PROTEST AGAINST OLYMPICS”