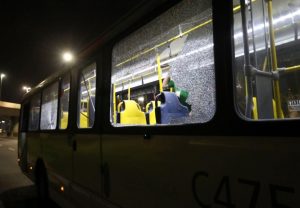 Journalists covering the 2016 Rio Olympics are today breathing a sigh of relief after they escaped relatively unscathed when the media bus they were traveling on was shot at by unknown assailants.

The bus in question was returning from the women’s basketball venue last night when shots were fired through the windows, resulting in two being shattered.

The incident took place close to the main Olympic Park and media centre.

It is being reported that two passengers suffered minor lacerations while a Turkish volunteer was slightly injured.

Brazilian authorities have attributed the damage to rocks.