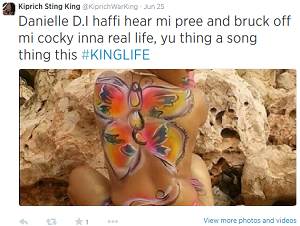 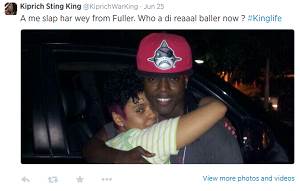 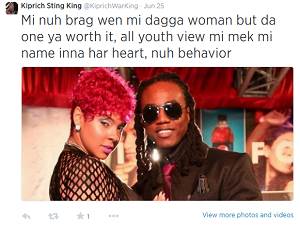 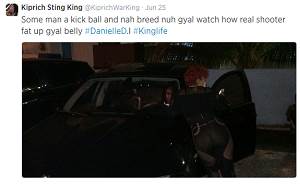 Dancehall artistes Danielle D.I and Kiprich have denied allegations made by a Twitter account called Kiprich Sting King, which claims that the artistes had sexual relations while filming the music video for their recent collaboration.
In a series of controversial posts, the Twitter account claims that the two recording artistes have been dating and even implies that Kiprich was the person who led to Danielle D.I’s failed relationship with former Jamaica and Stoke City star footballer, Ricardo Fuller.
“A me slap har wey from Fuller. Who a di reaaal baller now,” one of the tweets from Kiprich Sting King read.
The WEEKEND STAR contacted Kiprich for clarification and he said persons have been targeting his social network pages since the start of the year.
“This is a fake Twitter account, my real account is Kiprich Nuh Behaviour. I wouldn’t guh mek another twitter account fi talk things bout people. A just some mischievous people, me and D.I just do a song and video called Hear The Pree, and we bring out the concept in the video. When a man a guh call people name dem thing deh nuh good, me wouldn’t do that. That’s not my style,” he continued.
Get a grip
“The last time dem target mi Facebook a try get money from people and now this. Some people just idle and need something to do. Get a grip, get a hold a yu life man. I am a private person, I am more the sneaky type,” Kiprich said.
Danielle D.I also criticised the creators of the Twitter page, claiming that they were trying to hamper the progress of Hear The Pree.
“Are you serious, sex on set of a video? What kind of groupie business dat dem a pull off pan mi? This pass devastating. I woke up in such a good mood, I don’t know why people come up with this right now. Imagine you are trying to move forward and people are trying to drag you backwards. I have a very private life and I have moved on with my life, so I am deeply hurt to hear comments like this. Just stop being malicious and stop hating … oh God,” she said.
Danielle D.I and Kiprich recently released a raunchy trailer for their video for Hear Di Pree that will be officially released in July. She also has a new single titled, Heads Up produced by Sly and Robbie. Kiprich is also promoting the single Loyalty Over Royalty and will soon be leaving for Canada alongside Outaroad Records label mate Berri.
The Kiprich Sting King account now has over 2,000 followers, while Kiprich’s original account Kipponubehavior has over 25,000 followers.
[email protected]
Bookmark and Share