Friends, family and hundreds of wellwishers gathered in the Hollywood Hills on Saturday to celebrate the lives of beloved celebrity mother and daughter Debbie Reynolds and Carrie Fisher.

Comedy actor Dan Aykroyd and singer James Blunt were among the stars who made their way to the Forest Lawn cemetery, where the pair are interred side by side following their deaths just one day apart in December.

Fisher, who catapulted to worldwide stardom as rebel warrior Princess Leia in the original “Star Wars” trilogy, died in Los Angeles after suffering a heart attack. She was 60.

Reynolds, 84, who won moviegoers’ hearts as a star of “Singin’ in the Rain,” suffered a brain hemorrhage the following day at the Beverly Hills estate the pair shared as she was making funeral arrangements. 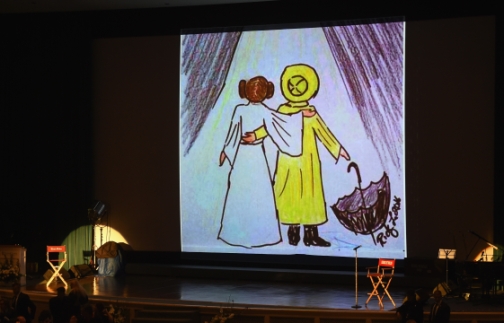 Blunt, a close friend of Fisher, debuted a tribute song entitled “I’m Here to Let You Go,” while there was music from the Gay Men’s Chorus of Los Angeles, who took the stage to perform Cyndi Lauper’s “True Colors.”

The attendees were treated to montages of photos from the women’s careers and intimate family snaps — accompanied by the music of “Star Wars” composer John Williams — as well as footage of Reynolds’s last performance, with Fisher and her daughter Billie Lourd.

There were speeches of remembrance from Aykroyd — who was briefly engaged to Fisher in the 1970s before she wed singer/songwriter Paul Simon — and Turner Classic Movies host Ben Mankiewicz.

Aykroyd recalled how he once saved Fisher’s life, applying the Heimlich maneuver to dislodge a Brussels sprout.

“If I had been with our beloved showboat, I might have been able to save her again,” Aykroyd lamented.

Actress Ruta Lee sang “I’ll Be Seeing You” in honor of Reynolds and there was even an appearance onstage by R2D2, the famous robot from “Star Wars.”

Reynolds’s son Todd Fisher — Carrie’s brother — told ABC’s “20/20” show at the time of their deaths that his mother had been devastated not to get the chance to see the actress one last time.

“The entire thing I’m calling a show, not a memorial… because my mother didn’t like memorials and funerals,” he told wellwishers, sharing anecdotes from the lives of the “two amazing women” that drew laughter and tears.

Gavin de Becker, an author and lifelong friend of Fisher, recounted a trip to Paris when the pair stole hotel bathrobes and told the crowd how everyone in school had a crush on her.

Fans had lined up for several hours before the ceremony wearing wristbands that bore the legend: “Debbie and Carrie forever in our hearts.”

Before her death, Fisher had completed filming for her part in the latest “Star Wars” episode, “The Last Jedi,” which is due for release in December.

Disney has confirmed there will be no changes to the movie because of her death.

One thought on “CARRIE FISHER AND DEBBIE REYNOLDS LAID TO REST”