CHECK DI LAST LINE………ITS WHAT WE HAVE BEEN SAYING…! 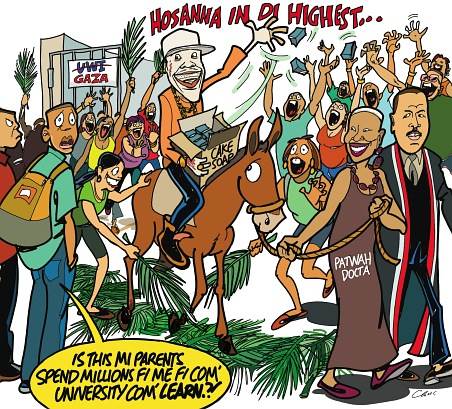 As Jamaican police in riot gear guarded barricaded streets outside, 10 members of an 11-person jury found Kartel and the three others guilty of the October 2011 killing of Clive “Lizard” Williams. One defendant was cleared of wrongdoing.

In a bizarre twist, a male juror was arrested Thursday evening on charges of attempting to bribe the jury foreman in an attempt to influence the panel to free Kartel, who is known for innovative, but often violent, X-rated lyrics. Authorities confirmed the arrest but disclosed few details.

Prosecutors alleged Williams was beaten to death at Kartel’s home in August 2011 after being lured there to answer for two missing illegal guns. His body has never been found. Police testified they retrieved a text message from Kartel’s phone saying Williams was chopped up in a “mincemeat” so fine that his remains would never be found.

Dennis Howard, author of the book “Rantin’ from Inside the Dancehall,” said the verdict was positive for the brash musical genre whose most prominent performers have a history of getting in trouble with the law, though not to the extreme Kartel has.

“The artists are realizing that they cannot be a bad man and an entertainer,” Howard said.

Before the day’s session started, police blocked off streets around the supreme court, seeking to prevent any disruption by fans of the entertainer. Still, shortly before the jury started to deliberate in the afternoon, about 200 people briefly broke through barricades at one intersection shouting “Free Kartel!”

Defense lawyer Tom Tavares-Finson had told jurors the prosecution’s case against Kartel was “dishonest” and “incompetent,” noting that witness statements and a compact disc with evidence saved on it somehow went missing. After the verdict, he said he was planning to appeal.

Last year, another murder case against Kartel and two other co-defendants collapsed after prosecutors failed to produce evidence to support allegations that the trio killed businessman Barrington “Bossy” Burton in 2011.

Kartel, whose real name is Adidja Palmer, has been in jail for about three years, but his songs are played widely and many young Jamaicans, especially those in blighted slums, consider him a hero of sorts.

0 thoughts on “CHECK DI LAST LINE………ITS WHAT WE HAVE BEEN SAYING…!”