CHILDREN ESCAPE DEATH AS FATHER’S VEHICLE IS RIDDLED WITH BULLETS 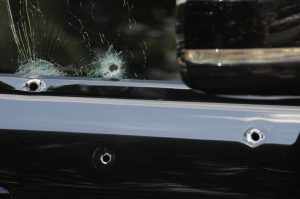 Police investigators on the crime scene after the car was shot up on Mountain View Avenue resulting in the injury of a man — Gladstone Taylor photo
Livern Barrett, Senior Gleaner Writer

A two-year-old child and his seven-year-old sibling narrowly escaped injuries on Thursday afternoon after the vehicle in which they were being transported by their father was sprayed with bullets along Mountain View Avenue in St Andrew.

According to the police, the father was shot in the chest and hand and has since been rushed to hospital.

Investigators say an Antiguan man on his first visit to Jamaica, was also in the black Range Rover, but was not harmed.

It’s reported that the driver of the luxury sport utility vehicle was returning from the airport when a car pulled up behind him metres from the Mountain View Police Station.

The police say the occupants of the car pulled guns and fired as many as eleven rounds before escaping.