Dancehall artiste Chin Chin is fed up. She has moved on with her life, but it seems that drama surrounding Gully Bop is threatening to engulf her once again. She is asking promoters to stop calling her with Gully Bop complaints.

“I no longer represent Gully Bop, I don’t do bookings for him anymore, please don’t call me when he misses flights, abandons shows or indulges in any crazy sort of behaviour, I am no longer associated with him,” she said.

Chin Chin is also ticked off that Gully Bop’s new girlfriend has been cyber-stalking her and using social media to attack her character. 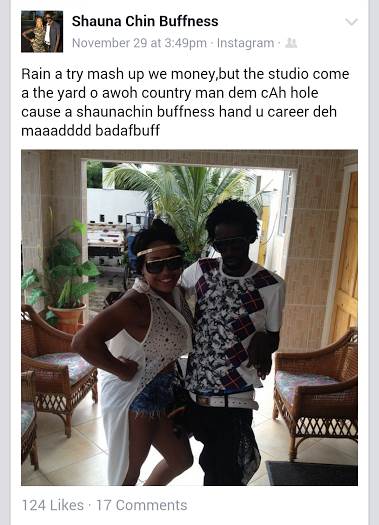 “Amari go pon Facebook and say mi a the most popular lesbian online on social media. Wah she know bout me? If me ah go lesbian, mi wouldn’t want she, look how she look like Spongebob, she dont stay right,” Chin Chin said.

She also made a comment about Gully Bop’s new dentures.

“Mi nuh business bout Gully Bop and him dentures dem need fi leave mi outta dem argument. Last year, a real dental professional offered to do his teeth for free, and she comes a year later and gets a quack to take out 7 of his teeth in a short period of time….is that even safe? Gully Bop better mind him no lost him new dentures inna her big p—-y, tell dem fi stop call up mi what’s-it-not name!!!!” she said.

“I’ve been very professional, keeping my composure and trying to help other females to better themselves and don’t go through the same thing I did growing up, I’m busy working on my EP with Frenzforreal Production and promoting my hit song that’s popping up on charts in Jamaica and the Caribbean,” she said.

Chin Chin’s ‘Jah Jah Pickney’ is bubbling on charts in Antigua and Guyana, and the video for the single is now on the FIWI Choice Top ten charts.

“Since dem two circus clown reach a Jamaica, dem no stop call up mi name. They post me name everyday, the Big Fat One post up something saying I am taking chicken pill to make my butt big, so tell me who is the lesbian now? Like how the stress left my face, I’ve been more sexier and working to represent for the ladies,” she said.

She had a parting shot for Amari and Gully Bop, adding that she does not want promoters to call her with anymore Gully Bop complaints.

“Amari, yu caan do wah mi do. While you are there watching me good good and mi buffness, you need to take care of the promoters that’s calling my phone fi dem money weh yu artiste tek and no show fi stage show, yu business spoil! All promoters need to stop calling me about Gully Bop business, I am building my own brand,” she said.