CHRISTIANS PROTEST THE U.S LIGHTING UP EMBASSY IN GAY COLORS..WHICH IS RIGHT

No more rainbow flag, try the Jamaica flag, was the message protesters hoped to send to officials of the US Embassy in Kingston yesterday. 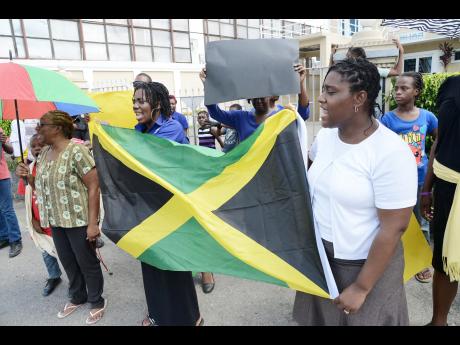 As Jamaica celebrated its 54th year of Independence yesterday, several Jamaicans sought to put a red line under that status by staging a peaceful protest outside the United States Embassy building in Kingston.

The protesters were riled up by what they claim is an attempt by the embassy to push a homosexual agenda in Jamaica.

According to spokeswoman for the protesters, Phillippa Davies, the protest was arranged to show disapproval with “the embassy’s action to raise the lesbian, gay, bisexual and transgender (LGBT) community trademark rainbow flag last Thursday”.

While the embassy has flown the rainbow flag in the past, last Thursday it went further by lighting the building with the rainbow colours.

For Davies, since the embassy has shown its support for the local LGBT pride week, Independence Day was the perfect opportunity to respond.

“We think it’s fitting to mark our Independence by reaffirming our right to self-determination as a sovereign people, so today (Saturday) we think it is appropriate to say that this continuing bullying, provoking and imperialistic action by the US Embassy and others … to coerce countries around the world to accept a political ideology that is against freedom; against human dignity, against the natural family and against God, we will not accept it,” said Davies.

“We are out here with the colours of the Jamaican flag; these are colours that we are proud of. There is nothing to be afraid of. These colours represent our heritage of freedom fighting, of standing for justice and true freedom, not just for us, but for people across the world. So these are colours and truth that we stand by,” added Davies.

Would not be bullied

She told The Sunday Gleaner that she considers her country an independent one, and declared that the protesters would not be bullied.

According to Davies, the US Embassy in Kingston is using what happens in its home country to force an ideology on Jamaica that is not correct.

Davies was quick to declare that there was nothing homophobic about the protest.

“This political agenda is being advanced by the US and other Western nations and it is against our independence. It is against our sovereignty as free people, so today is the day that we take this seriously and we stand,” she stressed.

“It’s not true to say that it is American soil. The Vienna Convention gives certain privileges to guests in our country, whether it is America, France or Canada, but the soil on which this building right here on Old Hope Road rests is Jamaican soil, and if they are our guests then they are to behave appropriately.

In the meantime, fellow protester, Helen Ann Brown, who described herself as a radical Christian, said they were protesting for Jamaica, not for Christians.

“Even the Rasta man say it wrong. Even the men on the street say it wrong. I am here defending the interest of the nation of Jamaica, and I am here to fight against cultural imperialism, and that is what some nations that have money are about,” said Brown.

4 thoughts on “CHRISTIANS PROTEST THE U.S LIGHTING UP EMBASSY IN GAY COLORS..WHICH IS RIGHT”