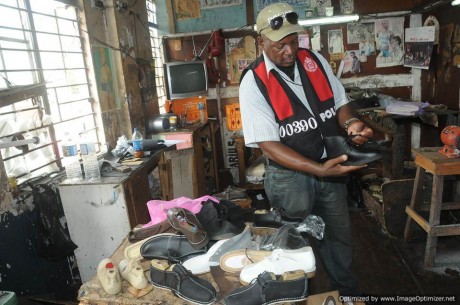 Cops lock down fake Clarks shoe factory; nine men arrested
Busted!
BY KIMMO MATTHEWS Observer staff reporter matthewsk@jamaicaobserver.com
Friday, July 18, 2014 29 Comments
Print this page Email A Friend!
Detective Inspector Clarence Bailey of the Anti-Trafficking in Persons and Intellectual Property Vice Squad examines one of the fake Clarks shoes seized during yesterday’s police operation in downtown Kingston. (PHOTO: BRYAN CUMMINGS)
NINE men were yesterday arrested during a major operation that led to the shutdown of an underground factory that was being used to manufacture millions of dollars worth of fake Clarks shoes.
Police said the men will be slapped with several charges, including breaches of the Trademark Copyright Act.
Head of the Anti-Trafficking in Persons and Intellectual Property Vice Squad of the Organised Crime Investigative Division, Deputy Superintendent Carl Berry, said about 1:00 pm the police, acting on intelligence, swooped down on a wooden two-storey premises located on East Queens Street across from the Kingston Central Police Station where they carried out a four-hour operation.
“Hundreds of pairs of fake Clarks shoes ready for the market were seized along with thousands of dollars worth of equipment used to make the items,” a police spokesman told the Jamaica Observer.
Police said that intelligence suggested that the factory was being operated at the location for over two years and was likely to have produced thousands of the fake shoes, valued at millions of dollars, for the local market.
A source told the Observer that the factory not only supplied the fake Clarks to stores in and around the Jamaican capital, Kingston, but also had a factory outlet that provided direct sales to the public, including members of the police force, who would pay $4,000 per pair. The retail price in stores would be about $12,000.
Senior officers of the constabulary said yesterday that they would be carrying out an investigation into the allegations that members of the police force supported the illegal activity by purchasing the fake Clarks shoes.
The lockdown led to a protest by a few downtown Kingston residents, who criticised the police for clamping down on the ‘little man’.
“The counterfeit market is a multimillion-dollar market and the police not clamping down on the bigger players importing the goods to Jamaica but want to pressure the small man who just trying to earn,” said one woman.
She was among a group of men women and children who gathered in the area and watched as police led away the men from the shoe factory.
Yesterday’s raid was the latest to be carried out under operations ‘Swirl’ and ‘Push Back’, which target perpetrators of intellectual property crimes which have been raking in millions into the coffers of organised criminal networks.
DSP Berry said yesterday’s raid pushed the number of counterfeit good seized since Monday to almost $600 million.
Several counterfeit items have been seized by the police in operations carried out in the parishes of St Mary, Kingston and St Catherine.
Among the items seized were two truckloads of counterfeit or knockoff Clarks shoes, bootleg rum, fake pharmaceuticals and medical supplies, and a quantity of compact discs (CDs) and digital video discs (DVDs). The police also seized a quantity of computer hard drives and other equipment during the raids.
“We know that our counter-offensive can reap rewards. Our focus at the Anti-Trafficking in Persons and Intellectual Property Vice Squad and, by extension, the Jamaica Constabulary Force, is to ensure that persons realise that intellectual property crimes are not only seen as a soft crime but that it is equally dangerous. It can cost lives,” Berry told the Observer earlier this week.
ADVERTISEMENT