The seizure of approximately 2.5 pounds of cocaine at the Sangster International Airport in St James on Wednesday, led lawmen to uncover more than J$2 million worth of cocaine, seize an illegal gun and arrest four people, including three Britons.

The operations, which a news release from the police’s Corporate Communications Unit said spanned three parishes, was conducted between Wednesday, September 14 and Thursday, September 15 by the Narcotics Police Division.

The police say one of the persons now in police custody is wanted in Britain.

Reports from the CCU are that about 7:00 pm on Wednesday, a British woman checked in to board a flight to London at the Sangster International Airport when she was searched and a tin marked “cheese” was found with cocaine weighing approximately 2.5 pounds. 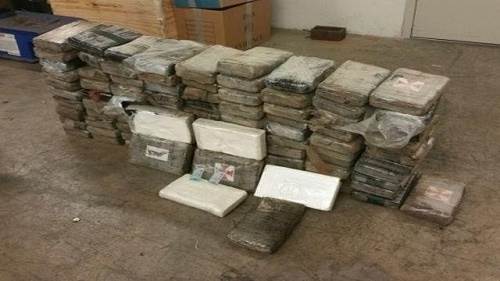 Narcotics operatives then reportedly extended the probe and two men, one of whom is a British national suspected to be involved in the illicit drug trade and wanted by the British Justice System, were taken into custody. The two were also found with tins of cheese containing 2.5 pounds of cocaine in a motor car.

The police say the motor vehicle was also seized.

Investigators did not stop there, they continued their follow-up operations throughout Wednesday night and about 4:00 am on Thursday, they were reportedly led to a house in Annotto Bay, St Mary.

The police say during a search of the house a 9mm pistol loaded with 14 cartridges and an ammunition box containing an additional 19 cartridges were found.

A British woman was arrested in connection with the gun seizure.

As the probe intensified, CCU said the narcotics operatives carried out yet another operation, this time in the Waltham Park Road area of St Andrew and a small quantity of ganja seized.

Deputy Commissioner of Police Glenmore Hinds, in commenting on the seizures, said, “The Police High Command commends the excellent job being done by the narcotics team. We made a deliberate move to ramp up our counter-narcotics operations this year and based on what we’ve seen so far, this year will see a significant increase in seizures when compared to last year.

“What is significant too, is that a number of these operations have led to the seizures of not only drugs, but also firearms. We congratulate the team, and look forward to this momentum continuing throughout the rest of the year and beyond,” he said.

The four will be interviewed in the presence of their attorneys and thereafter, formal charges will be laid, the police say.

One thought on “COCAINE FOUND IN CHEESE TIN AH SANGSTER”