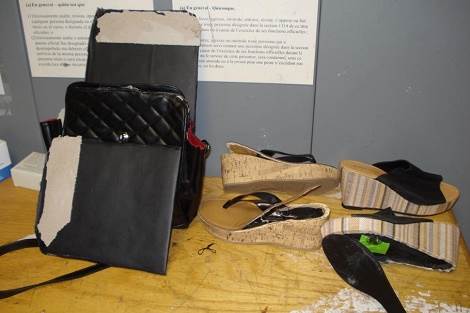 A Jamaican national has been arrested for smuggling more than three pounds of cocaine inside a Chanel pocketbook and platform shoes in her luggage, authorities said Monday.
Janisha Atkins, 33, was selected for an examination by U.S. Customs and Border Protection officers Sept. 19 after she arrived at New York’s Kennedy Airport aboard a JetBlue flight from Montego Bay.
Inside her pink and purple suitcase, officers noticed a strong odor coming from her pocketbook and two pairs of platform shoes, which also seemed unusually heavy, according to the complaint filed in Brooklyn Federal Court.
The lining of the pocketbook and the heels of the shoes were probed further and officers discovered white powder inside, the feds said.
Atkins admitted that she knew there was drugs in the items and was charged with importation of a controlled substance.
NYC PAPERS OUT. Social media use restricted to low res file max 184 x 128 pixels and 72 dpi U. S. Customs&Border Protection Janisha Atkins is being held at Metropolitan Detention Center in Brooklyn after the cocaine was allegedly smuggled in these shoes and purse.
The total weight of cocaine seized was approximately 3.7 pounds, with an approximate street value of more than $64,000, according to a CBP spokesman.
“This latest seizure demonstrates the vigilance of our CBP officers, and their excellence in detecting those who would try to smuggle these illegal substances,” said Robert E. Perez, director of field operations for CBP’s New York office.
Atkins is being held without bail at the Metropolitan Detention Center in Brooklyn.