Matthew’s winds had scarcely subsided in eastern Cuba Wednesday when Msgr. Wilfredo Pino Estévez, bishop of the Diocese of Guantánamo-Baracoa, set off at 5 a.m. to see what the hurricane had wrought on Cuba’s northern coast.

Representatives of Caritas Guantánamo, a Catholic charitable organization, accompanied him, but they could only make it about halfway to Baracoa because of the muddy, impassable roads. The bishop continued on in a Jeep over a mountainous road where Matthew’s heavy rain had loosened mudslides before reaching the city of about 82,000 residents. 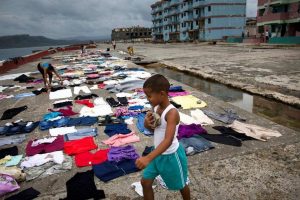 What he found in Baracoa, where Matthew’s eye exited Cuba early Wednesday, was a city with ruined roads, a damaged communications system, and neighborhoods up to three blocks away from the sea reduced to rubble by storm surges and high winds.

“Right now we’re trying to negotiate a point of entry for aid,” Father José Espino, of San Lazaro Church in Hialeah, said Friday at an Archdiocese of Miami news conference. He was in touch with Pino by phone Friday morning when the bishop returned from Baracoa. Both the airport and port in Baracoa were damaged. The seaport at Santiago, which wasn’t damaged during the storm, is the nearest major port.

The Archdiocese of Miami is asking for money and food donations, as well as offers to transport goods by air or sea, for hurricane victims in both Cuba and Haiti. The most immediate needs are canned goods, especially proteins, and rice and beans — preferably on pallets and ready to go, Espino said.

“Crops have been affected [by Matthew], and food is critical,” he said. In Cuba’s Caujerí Valley, 448,000 banana plants and eight million tomato seedlings were damaged.

Contributions can be made through the Miami Catholic Charities website by clicking on the “you are supporting” option and selecting Disaster Relief-Hurricane Matthew.

The archdiocese is also asking its Miami pastors to hold a special collection this weekend during all Masses to aid those affected by Matthew in the Caribbean and the United States.

On Thursday, helicopters carrying Cuban authorities and journalists arrived in some of the towns that had been cut off by impassable roads and downed communications systems since the hurricane passed through Guantánamo province.

Aerial images from Maisí showed that the majority of homes had lost their roofs, and those from Baracoa showed flooded areas, destroyed homes and fallen trees. Entry to Baracoa is limited by mudslides along La Farola highway, a ravaged coastline and a partially collapsed bridge over the Toa River.

“When we saw the helicopters, it filled out hearts with joy because it was a sign aid was arriving. We hope that they give us every assistance,” a woman in Baracoa told Cuban television.

Some residents of Maisí put up a Cuban flag amidst the rubble. They told the Guantánamo newspaper Venceremos that they raised the flag because they were revolutionaries and wanted authorities to know they were there and needed help.

Despite heavy damages, so far there have been no reports of storm-related deaths in Cuba. Hundreds of thousands of residents of eastern Cuba were evacuated to storm shelters or sought refuge with family and friends. The Civil Defense system even evacuated some residents of Maisí to caves in the nearby mountains where they sought shelter for three days.

“Thanks to this we are alive, because when we returned to our homes, they were half full of water, and all of them, except mine, had no roofs,” Julio César Romero told a reporter from the Juventud Rebelde newspaper.

Maisí, Imías and Baracoa remained without power and telephone service at midday Friday. Government efforts focused on restoring fiberoptic cable service to the communities. About 112,000 residents of Guantánamo remained without running water.