CURSED, WILL SHE EVER FIND PEACE?

Dear Taiwo,
I hope you and your readers will be able to help me. I want to believe that someone out there will believe my story and be willing to help me. I haven’t told a lot of people, but the few of those who heard refused to believe me and that is probably the reason why I haven’t found solution.
ADVERTISEMENT
I am the second of my mother’s three children; two girls and a boy. Who is our last born. She had the three of us for three different men. She was legally married to my elder sister’s father; unfortunately, he died months after their marriage while she was still pregnant with my sister.
She gave birth to her and her father’s family till date has been there for her. She met and started dating my father seven years after her first husband’s death. Her mother and even her first late husband’s family advised her to re marry as she was still too young to live alone.
She met and started dating my father, a relationship which went sour few months after they met but she was already pregnant with me. One of my father’s numerous offences according to my mother was the fact that he lied that he was single while he was already married with children.
The day she saw him last was the day his wife met and embarrassed my mother. He ran away and never came back. My mother couldn’t forgive me of this offence I knew nothing about, but I suffered for it till she died. I have never met my father. The closest I was to meeting him was when I started Junior Secondary school. I met a girl who shared my surname and became friends and talked about ourselves.
On her birthday, she invited me home to introduce to her parents. I guessed her father was my father too; I would have looked at him very well. She was eventually withdrawn from my school few days after. I didn’t see her again until recently when she told me all that happened after I left.
In fact, she told me tha the photograph we took together that day remained with her and the fact that I am my father’s carbon copy. Unfortunately, he passed on, few months before we met again. In fact, she; (my friend) and half sister, is one of those helping me out now.
I never enjoyed my mother’s love. All because I looked too much like my father and I reminded her of him every time she looked at me. In all sincerity, my mother hated me. She made go through a lot of difficulties and me was so cruel to me. In fact, I am suffering today as a result of her cruelty. She treated me worse than her slave.
Because of the way she treated me, I stayed most of the time with my grandmother, but when she died, having nowhere else to go, I had to go back home.
She dated and gave birth to a boy for another man who we all called ‘uncle’. He was also responsible for his son. That left only me, the child of sorrow as she always referred to me. By the time my elder sister finished secondary school, her father’s family sent her to the United States of America for her university education.
It was also unfortunate that my siblings too treated me the same way my mother treated me. I cannot forget the incident which happened when I was in Senior Secondary three. We were asked to pay for our examinations, I told my mother, and she said she had no money to give me. On the day the registration was to close, I wept and said I wasn’t going to school if she didn’t give me the money.
She, however grudgingly gave me the money when our neighbour intervened. She promised to show me hell when I returned. The joy of getting the money for my examinations was too much to make me remember her threat.
When I came back from school, she beat the living day light out of me, she tied my hands and feet like a criminal and after she was done flogging me, she pulled her clothes, opened her laps and peed on me cursing me while she was at it.
It was the saddest day of my life. I can never forget. That day, I made up my mind to run away from home as soon as I could. I endured till I wrote my final papers. Fortunately, I passed and secured admission into a federal polytechnic.
The pastor of Pentecostal assembly where I worship and some church members raised money for me to go to school when my mother refused to pay. The church helped me because the pastor and some of the members knew what I was passing through.
It was one of our church members who opened her door to me when I returned from school as there was nowhere for me to stay. She lived alone with her son, because her husband was abroad. This was how I became her responsibility; because she provided my needs and made sure I finished my Ordinary Diploma without stress. My mother threatened her several times, but she was not bothered by her threat.
She was very nice to me. At a stage, encouraged by her, we made an attempt to look for my father, she spent a lot of money, but we were not successful.
I was undergoing my compulsory one year Industrial Attachment, when her husband came visiting. They really loved each other and I think the distance really helped their relationship. Her husband also took me like his sister and after listening to my story, he promised to help in whatever way he could too. 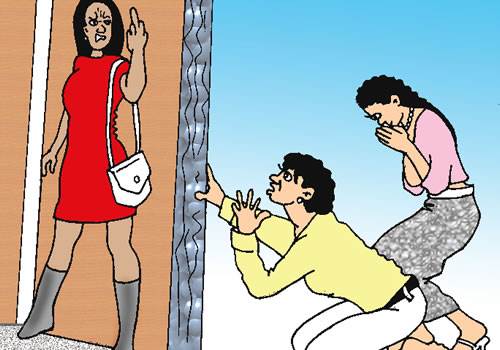 PART II
Dear Taiwo
I really didn’t know what got into me, but I discovered that I became jealous of her and her relationship with her husband. And I started telling her husband lies about her whenever I had the opportunity.
It became so bad that they started fighting. Her husband would raise allegations and refuse to tell her the source. The most painful thing however was that she would run to me for counsel and of course, I would tell her to match war for war.
It became so bad that they quarrel all the time and I eventually started sleeping with her husband. Their marriage almost broke up, in fact her husband sent her out of their home for weeks without allowing her to take her son and he insisted that I must stay back.
I don’t know what happened, her mother took her to a spiritual church and after several prayer sessions, her mother and mother-in-law came home and insisted that her husband reveal his source of information. I was shocked that he told the truth, because he had swore not to tell anyone. As if that was not enough, her neighbour had told her she suspected something fishy between her husband and I.
He didn’t deny sleeping with me. I was ashamed. I confessed to my pranks and asked her to forgive me. Instead of forgiving me, she sent me out of her home and cursed me. She said I will never find rest and at the peak of my joy, sorrow will always be waiting for me. I can never forget those words.
I left her house and began fending for myself. I dated my boss at the company where I was undergoing my Industrial Attachment. He rented an apartment for me and that was how I started living alone.
I cannot begin to write all the things I did to survive here on the pages of the newspaper. But I managed to survive though hard and difficult. You won’t believe that neither my mother nor my siblings looked for me.
I met and dated Omokunmi when I went for NYSC, some of his friends who knew my pedigree advised him not to have anything to do with me, but he refused. We started dating and in all my life, he was the best thing that happened to me. He made me happy and showed me love. Two years after we met, he introduced me to his parents. They are rich and very influential in the family. I had already told him every thing I went through. He told his mother with the exception of some salient points to save me from ridicule.
His mother had no daughter, so she adopted me as hers. We got married and it was during the time we were preparing for our wedding that I knew my mother passed on two years earlier after a protracted illness. She was with my elder sister in the US, she was buried and no one told me.
Omokunmi’s mother took me to the US where we met my sister and brother who had also relocated to the US. She tried to reconcile us and fortunately, they confirmed some of the things she had heard about the relationship between us.
To cut my story short, we got married and I was happy, my happiness was however cut short when by the time my marriage was five years and I cannot have a child. We prayed and begged God and I eventually became pregnant. I gave birth to a set of twins and lost them three days after they were delivered.
I became pregnant again and lost several times. I started falling ill and my health really failed me. Thank God for Omokunmi’s mother, she was really there for me, like my own mother. When orthodox medicine failed, she decided that we should go spiritual.
It was during our spiritual quest that I was told that I have been cursed and I should go and seek forgiveness. I remembered the two people who cursed me. My mother was long dead and gone. I went back to see that lady in company of my mother-in- law, but she wouldn’t even see me.
We went back to the spiritualist; he insisted that if I can’t get both of them at least, she should forgive me. I know I really hurt her, but how can I get her to forgive me? I later learnt that she also suffered an ailment as a result of the emotional trauma she went through during the time I caused trouble in her family. She actually ran mad as a result of depression. I am awfully sorry, but how can I get her to forgive me so that I can find fulfillment in my marriage?
Fransisca

0 thoughts on “CURSED, WILL SHE EVER FIND PEACE?”

112 Users Online
Back to top