The suspect in the Dallas police sniper attacks told negotiators that he wanted to kill white people, especially white cops, after a recent spate of US officer-involved shootings of black men, the city’s police chief said Friday.

Chief David Brown appealed for unity in the wake of the attacks in the major Texas city, which left five police dead and nine wounded – seven of them cops – saying, “This must stop – this divisiveness between our police and our citizens.”

Brown said the suspect was killed by an explosive device detonated by police during a tense standoff after Thursday night’s rampage, which erupted during a protest over the fatal police shootings of two black men this week elsewhere in the United States.

“Dallas officers are hurting. We are heartbroken. There are no words to describe the atrocity that occurred to our city,” Brown told reporters. 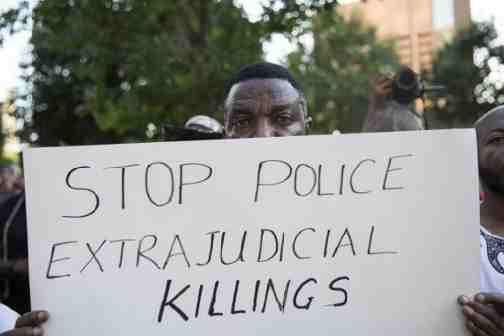 The gunman said he was not affiliated with any organized groups.

Though police said the gunman professed to be acting alone, three suspects were in custody. Mayor Mike Rawlings said earlier they were “not being very cooperative.”

Of the five officers killed, one was a Dallas transit cop.

Rawlings asked Americans to join Dallas residents in prayer at midday, “to bring our city together and our country together — to heal wounds, not create them.”

124 Users Online
Back to top