DEM SEH DUDUS SET IT AND DEM BRUCK IT 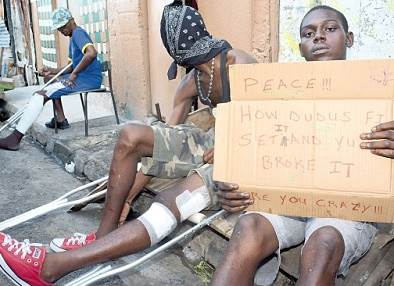 CRIMINALS locked in a bloody feud in West Kingston are using boys as young as 12 to carry out their deadly attacks in the area, the police have confirmed.

“We have had reports that the men involved in this feud are using youth as young as 12, 13 and upwards to carry out these deadly attacks,” Senior Superintendent Steve McGregor told the Jamaica Observer, adding that the boy killers were fearless and had no respect for age or gender.

The information was first passed to the Observer on Monday by a resident of Tivoli Gardens, one of the communities in the constituency.

“The man dem who a do the killings nuh have nuh respect for law and order or people; dem even a use some young boys as young as 12 and over to carry out their attacks,” the resident said.

According to the resident, the latest victim of such an attack was Edward Black, a senior member of the community, who was gunned down in broad daylight along Chestnut Lane.

On Monday, during an operation that resulted in the recovery of one firearm and several rounds of ammunition, Senior Superintendent McGregor pointed out that the attacks are not confined to one side.

He also confirmed that the actions of the criminals have left members of the religious community in fear, especially after a Christian man was shot dead by gunmen when he told them that he was on Jesus’ side in response to their demand that he state which side he was supporting in the feud.

Monday’s police operation was staged two days after a 12-year-old boy and a 28-year-old man were shot dead and 10 other people shot and injured by gunmen who attacked a group of people in Denham Town.

Since that incident last Friday night, the police have released the names of several suspects who are also believed to be involved in several other incidents in the area.

Yesterday, police said nine persons on the list turned themselves over to the police. Police said they would also continue to maintain a presence in West Kingston as tensions are still high, especially in Tivoli Gardens where residents staged a protest and burned several T-shirts with the image of member of parliament Desmond McKenzie on Sunday.

The residents accused McKenzie of taking sides in the ongoing feud. But the MP has dismissed the residents’ claim as nonsense, saying that his position was that every act of criminality committed in the constituency must be dealt with.