Portmore Needs … A PLACE TO BURY THE DEAD 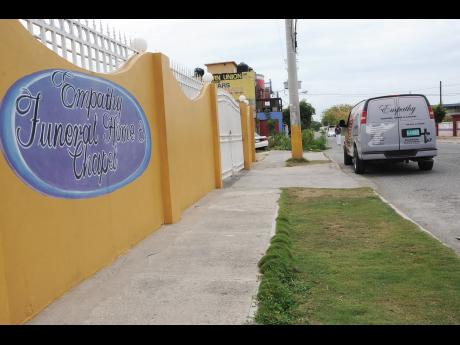 A place to bury the dead is one item on the must-do list of acting Mayor of Portmore Leon Thomas, who argues that thought should be put into building a cemetery in the dormitory community.

According to Thomas, the cemetery would be a possible source of income for the municipal council, and is one of the features of a modern city.

“We have more than 200,000 people in Portmore, we have to also think about our loved ones in Portmore. We have to make preparations for the generation to come,” said Thomas.

He argued that the realignment of the Portmore boundary has given the municipality more land for development and created the space for a cemetery.

Thomas accepted that care would have to be taken in determining the exact location for such a development, given the depth of the water table in Portmore.

“We wouldn’t put a cemetery now in the older part of Portmore, because you wouldn’t have the land space, and if you are going to build a cemetery, you want acres of land. You don’t want nothing that will be filled within two years’ time,” said Thomas.

The acting mayor accepted that the ultimate decision to create a cemetery in Portmore would have to be made by other state agencies, including the Ministry of Local Government and the National Environment and Planning Agency.

“Even if I am not sitting at this table, it is something that somebody would have to put in place, because if you are developing a municipality, you have to have somewhere in place,” he said.

But Thomas’s suggestion for a cemetery is facing the expected opposition from some residents.

One householder in Passagefort said that he first heard the acting mayor expressed his desire during a meeting last year and it was shot down by those in attendance.

“I don’t know who in Portmore is going to want a cemetery beside them,” said the resident.

But the member of parliament for St Catherine South Eastern, Colin Fagan, believes that a cemetery in Portmore is almost inevitable.

“Over time, you are definitely going to need to have a cemetery, given the age of the community, and it is something that you will have to do,” Fagan told The Sunday Gleaner, even as he accepted that this proposal would face strong pushback.

“I remember the first time they were trying to establish a funeral home in Portmore. It was a hell of a confusion and protest. People were protesting quietly and otherwise, saying that they didn’t want any funeral home in Portmore. Can you imagine a cemetery, and where? Remember, most of the newer parts of Portmore are reclaimed land,” said the People’s National Party representative.

According to Fagan, in the past, the St Catherine Parish Council initiated discussion about building a cemetery in Hill Run, St Catherine. No decision was made following those discussions.

In the meantime, first-time member of parliament for East Central St Catherine, the Jamaica Labour Party’s Alando Terrelonge, is yet to come out on either side.

Terrelonge argued that consultations would be needed before a decision could be made on whether Portmore should have a cemetery.

He said when he raised the matter with 10 residents in his constituency last week, the objection was unanimous.

“It is really a matter for the residents of Portmore,” said Terrelonge.