DETAILS ON 3 MEN WHO DIED IN CAVE

It wasn’t a daily chore. But occasionally the three St Catherine farmers whose bodies were pulled from a cave in Dunbeholden yesterday would go there to get water for their crops.

Last Friday, 48-year-old Richard King, 36-year-old McGray Sergon, and Alfred Succan, believed to be about 36, died during that quest for the precious resource.

According to family members, the men died after inhaling toxic fumes from a pump they were using to fetch the water.

A fourth farmer, whose identity the 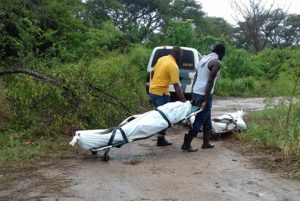 Jamaica Observer did not ascertain, escaped the tragedy and was taken to Spanish Town Hospital where he is being treated.

On Monday, police reported that they had launched a search and rescue operation for the men who, they said, were trapped in the cave after they got into difficulties.

But yesterday, the dead men’s families rubbished that report as they, along with firefighters, worked tirelessly for hours in the rain to remove the partially decomposed bodies from the cave about five miles into the hills from the main road.

The relatives told the Observer that the men were never trapped in the cave, and that they had discovered their bodies from Monday morning after they found the fourth man lying unconscious at the mouth of the cave.

“Dem go from Friday and bring pump and pipe and connect dem up, and night catch dem. So dem seh dem a stay di night. But the gas weh dem a inhale knock dem out. A crawl di next man weh inna hospital seh him crawl out, and seh him step pon one a dem body and come out,” Sergeant’s brother, Sadie, said.

King’s niece, Marsha Henderson, who broke down in tears at the sight of her uncle’s body, said that family members became concerned about the men and went in search of them on Friday after several calls to their phones went unanswered.

“But when we came and found the other man at the edge of the cave we could see two of the bodies from where we were standing, but we couldn’t see my uncle body because he was at the bottom of the cave,” Henderson added.

She said that relatives and friends wanted to remove the bodies from Monday but were told by the police to await the arrival of firefighters.

Henderson and other relatives, however, expressed displeasure at how they claimed the police handled the situation.

She, too, later broke down in tears at the sight of her relative’s body.

The Greater Portmore police are investigating.

2 thoughts on “DETAILS ON 3 MEN WHO DIED IN CAVE”