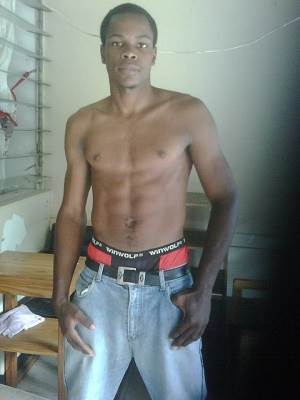 WARNING YOUNG GIRLS WOMAN MURDER USING.HIM LOVE FI SUCK PU**Y FI ATTRACT MORE VICTIM HIM KILL HIM BABY MOTHER BCAZ HIM SEY HIM NUH WANT NUH BABY AND DI BWOY NEVER GUH LOOK FI DI BABYMOTHER RIGHT THROUGH HER PREGNANCY AND DI FIRST TIME HIM COME DI SAME DAY DI BABY TUN SIX WEEKS HIM STAB HIM BABY MOTHER, BABY OF 6WEEKS Wickeb Bwoy Mi want di young girls dem be careful of this yute him name Nesseime arklight Marder him stab him baby mother kimberly mathews in her sleep when di baby was jus 6 weeks old and tried to kill her mother who woke up after hearing her daughter death scream a god mek di mother did have the baby in her bed this happen on Lincoln ave in kingston .A police tek him outta house after di mother hear dI sream she run in an c her pickney dead she start sream an him hold har from back way an try fi choke her to death an some how she grab a hold a him balls and squeeze dem him kick off di door completely an some yute hold him but him get lucky caz a di punk dem in a di place hold him
https://www.facebook.com/fantasykid.ness.7

***********What the sender left out is that the mother of his child was gay, so it is unknown the real circumstances of the murder because they were never a couple. Circumstances here meaning that they may have made some arrangements of sorts because the young man seems to be some type of gigalo and has numerous social media accounts soliciting women , in one case he asked a young woman for more to help with his school fees*************