The Ministry of Health said yesterday that it is prepared to launch an investigation into whether Chinese restaurants are serving dog meat.

Lundie Richards, who is acting as the country’s chief medical officer, made the revelation yesterday, days after a message emerged on social media of claims that at least one Chinese restaurant in Jamaica is serving up dog meat.

“I personally don’t believe that we should make a pronouncement on it without doing an investigation,” Richards said.

He told THE STAR that a team of health officials will have discussions about the issue before determining the next step.

“If there are sufficient reasons for us to launch an investigation, then we will do that,” Richards added.

The social media message, which has sent tongues wagging across Jamaica, contains an image of a skinned, unseasoned animal, resembling a dog, in an metal bowl. 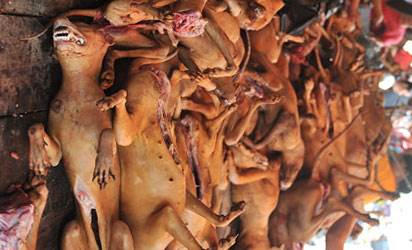 A person who has an in-depth understanding of public health told THE STAR that while the allegations of Chinese restaurants dicing and spicing man’s best friend is not far-fetched, it is very hard to verify.

“The public health officers would have to be there at the point where they are preparing,” the person said.

The health expert said that if the allegations are true, the sale of dog meat could pose danger to the health of Jamaicans because there are no guarantees that the animals being slaughtered are free of diseases.

Under Jamaica’s Public Health Act, the slaughter of animals or poultry for human consumption is monitored by the health authorities.

Damion Chin, president of the Chinese Benevolent Association, said that allegations is not good for business.

“I remember sometime in the 90s there was an allegation about a business and it ruined the business,” Chin said.

“I haven’t heard about it, but it can’t be good for business,” he added.