A radio producer and a presenter were shot and killed at the FM 103.5 radio station located within a shopping mall in San Pedro de Macoris, just east of capital city of Santo Domingo on Tuesday.
The deadly shooting occurred in a broad daylight as Luis Manuel Medina was presenting a news program Milenio Caliente (Hot Millennium) on a Facebook live broadcast.

One woman was injured in the shooting. Police have detained three suspects, but have not yet filed charges as they try to determine the motive behind the brutal attack. 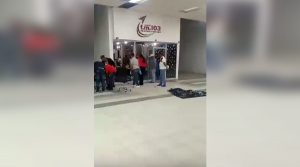 Several gunshots are heard on the video and a woman yelling “Shots! Shots! Shots!” before the footage abruptly ends.

The producer and director Leo Martinez was fatally shot in an office adjacent to the radio booth. The radio station’s secretary Dayaba Garcia suffered a gunshot wound and has undergone emergency surgery, according to local police.

Three men were detained following the attack, but none of them has been reportedly charged so far. The police has not yet determined a possible motive for the brazen attack.

The Milenio Caliente is a popular local program, known for its coverage of social issues coverage and political analysis. The slain announcer had been criticizing pollution problems at Laguna Mallen, a lake in San Pedro which is supposed to be a protected natural resort.

While the harassment and intimidation of journalists covering organized crime and corruption in the Dominican Republic are believed to be quite common, the attack on radio station is unprecedented.

The last time a journalist was killed in the country was in 2015, with police putting it down as a robbery which had gone wrong, but neither victim’s car nor his phone were reportedly stolen during that incident. The 2015 case still remains unsolved and no suspects have been identified.

One thought on “DOMINICAN RADIO HOSTS KILLED DURING FACEBOOK LIVE”