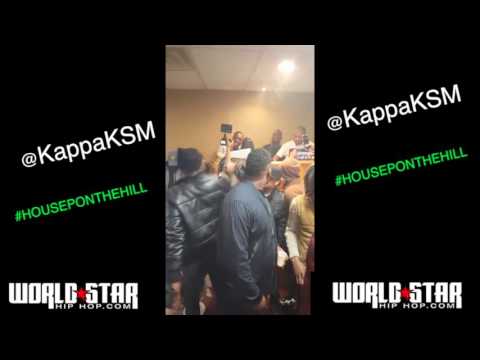 SENDER’-Popular dancer Craigy Dread tries to dis DJs for not playing his song and subsequently sustained a beating from Dancehall’s new rising star Kappa’s entourage in NYC night club.
Per eyewitness reports, Kappa was performing at the DJ booth after being booked to make an appearance at a 12/22 event when Craigy Dread, also present, became outranged that DJ’s are alledgely not showing his song any love. He threw a beverage at the DJ booth in a jealous range before receiving a beating. There is no update on Craig Dread’s status at this time, but witnesses report he got a serious beat down for his attempt at disrespect. DJ Black Child later posted a picture of his bandaged fist on Instagram indicating as Kappa’s new single “House Pon Di Hill” states, ‘me friend den a bad chargie’.

8 thoughts on “DUS OUT PROMOTION”