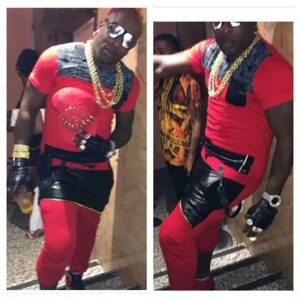 IT looks like a skirt.
Social media has been buzzing for the past two days after a photograph surfaced featuring local deejay Elephant Man in what appears to be a skirt.
The deejay, who calls himself the Energy God, posted the photographs on his Instagram page. He is seen wearing a red, black and blue ensemble.
At first glance, the deejay seems to be sporting a black leather micro miniskirt and red leggings with a matching red T-shirt accessorised by ‘blinging’ jewellery and fingerless, black leather gloves.
The photo, which has gone viral, has attracted its fair share of comments from the deejay’s fans and curious viewers alike.
Upon closer inspection of a series of photos on Instagram, however, it is clear that the black leather strip runs across the front of the deejay’s red pants, creating a skirt-like illusion.
Sound system selector-turned-deejay Tony Matterhorn also took to social media and commented on the fashion sense of the Pon Di River artiste. In a video posted on Facebook, Tony Matterhorn drew parallels to a situation in which he donned a wig and did impersonations and there was a backlash from the dancehall community. In his own inimitable style, Matterhorn declared: “Can tell me why Elephant Man deh inna one skirt? Unnu memba when me put on the wig and a impersonate? So what unnu a seh now?” questioned Tony Matterhorn.
There has been no word from Elephant Man, who is no stranger to controversy.
Ever since his early days as a member of the Scare Dem Crew, his fashion sense has always come into question, whether it was his red and yellow hair, or his choice of outfits including the Captain America costume he wore to Reggae Sumfest a few years ago.
This is the second deejay in recent months to face a flurry of comments on social media regarding their fashion choices.
Deejay Aidonia was also heavily criticised for what was seen as a dress which he wore to last year’s staging of Reggae Sumfest.
— Richard Johnson
http://instagram.com/p/qQWXHElwFk/