Usain Bolt’s images are splashed all across the vast urban jungle of Rio de Janiero.

They can be seen in a multiple of forms inside airports, train stations, on giant billboards, buses, blimps, shop windows, you name it.

There is no doubt who is the real big man here.

But while the real Bolt is yet to take to the track here, there is a Jamaican working in Brazil who is enjoying some measure of fame as he’s being called “Usain Bolt” by the locals in the sprawling South American country even though the two have little in common, except their nationality. And one more thing, they both are from Trelawny. 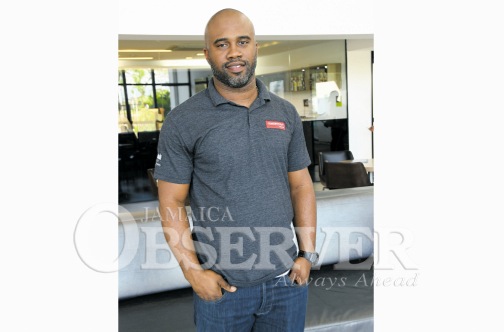 Milverton Richards, 34, is revelling in the attention, and he doesn’t mind that he is being called by the name of his more famous countryman.

“Everybody calls me Usain Bolt and I never meet Bolt from mi born,” said Richards, as he switches from standard English to the Jamaican dialect known as patois.

“But I embrace it same way because they love Usain and I am proud,” he added, before bursting into laughter.

Richards hails from Wakefield, Trelawny, but emigrated to the United States of America some 20 years go.

“I went to Dennis Toby Basic School and Wakefield Primary School and attended Muschett High for one day, before them drag mi come a foreign,” he told the Jamaica Observer at the Linx Hotel, where the Jamaica Olympic team stayed during their pre-Games camp.

It is clear, and Richards is quick to admit it, that he was not inbued with athletic ability. His skill lies elsewhere.

He is a mechanical supervisor at Odebrecht Oil and Gas that operates offshore drilling and his company has posted him in Brazil for the past five years.

“Basically I work on a drilling vessel, which is like a drill ship and I am in charge of all the drilling equipment,” he told the Observer.

Richards, who was staying at the same Linx Hotel as the Jamaican team, said he was in Jamaica only last month to visit family in Trelawny.

During the interview, a mischievous smile broke out on the face of the Jamaican, then he dipped into his bag and pulled out a magazine with a massive picture of Bolt dominating the cover.

“They (coworkers) gave me a gift this morning, a magazine with Usain Bolt on the cover,” he explained.

Richards’ light-heartedness disappeared as quickly as it appeared, when he remembered that he would not get to see Bolt run…the real Bolt, that is. He is scheduled to leave Rio before the track and field competition starts on August 12.

“No (I won’t get to see him), because of the situation in Brazil, the company won’t allow us to overstay,” said Richards, as he shook his head in despair.