Nelson, 22, was stabbed to death by a 58-year-old man when she turned up for work at Torpedo Loan on Brown’s Plaza in Ocho Rios.

Reports are that Nelson, who usually opens the business place, was in the process of doing just that when she was attacked by the man with whom it is alleged she had an intimate relationship. People gathered near Brown’s Plaza on Wednesday expressed shock at the gruesome killing. 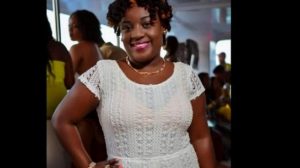 “You have to be careful how you choose your partner. When you a leave them you can’t tell them,” one woman said. She expressed shock that such a young promising woman was killed. “Mi a woman so mi feel it,” she continued.

One man who was in the area said he saw the 58-year-old man seated across from the plaza, but had no idea he was awaiting Nelson. “Him mek up him mind man. Him plan man,” the man said. “The man sit and wait until she come fi open up the place,” he added.
Nelson was described as hardworking and ambitious by persons who knew her. Many took to social media expressing shock that she was killed in such a manner.

Allegations are that the man locked the gate to the plaza to prevent anyone from coming to Nelson’s rescue.

When OBSERVER ONLINE visited the plaza on Wednesday, the small loans company was closed. The blood-stained windows were a sign of the tragedy which happened earlier.

People could be seen scrubbing blood stains from a section of the building where Nelson had run trying to flee her attacker.

She was taken to the hospital where she was pronounced dead. The man is now in police custody.

The Ocho Rios police are investigating.