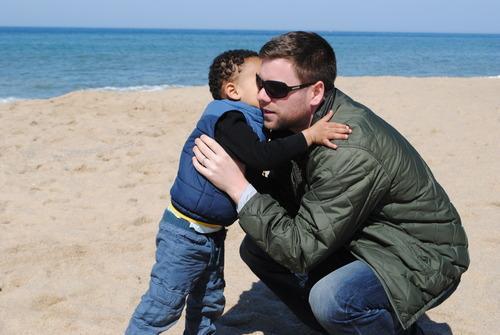 ‘I Hope My Son Stays White’
I am a white man, and part of the privilege that comes along with that fact is this: I know, with something bordering on 100 percent certainty, how my death will not be portrayed if I am shot and killed while walking down the street unarmed.
No one will scour my social media accounts for photos of me wearing a hooded sweatshirt or flipping off the camera. No one will ignore my lack of a criminal record and decide that I’m a “thug” for unnamed reasons. It won’t matter whether I’ve smoked pot, or shoplifted, or if I was ever suspended from school.
And, especially if my hypothetical assailant turns out to be black, I can be confident that there will be no rallies to support him. His identity will not be hidden from the public for days, and no crowdfunding campaign will raise a six-figure sum to support his family through “their” difficult time.
There will be no national effort to blame me for my own death.
But I can’t, with any confidence, say the same thing for my son. At least not yet. He’s three years old, and although my wife is Haitian, right now his skin is only a couple of shades darker than mine. He’s still light enough that, when my wife takes him out alone, people sometimes think she’s his nanny and ask how much she charges. He’s light enough that, from a distance, he can pass as white.
It’s a sickening thing to admit, but I hope he stays that way.
I want my son’s skin color not to matter, but the truth is that it does. If he gets darker – if his skin eventually comes to resemble my wife’s more than mine – there will be consequences for him. People will fear him. Not everyone, but plenty of people, and he’ll never know who until it’s too late. It will only be worse if he wears a hoodie and sags his jeans, and so shamefully I also hope that he’ll be “culturally white,” following the trends of the suburbs and not the inner city.
If he does darken, women will cross the street when they see him coming, the way they sometimes do when they pass my wife’s brother on the sidewalk. Convenience store employees will follow him suspiciously around the aisles. Cops may hassle him for things I don’t think twice about, like jaywalking.
And, if any of these people decide they need a gun to defend themselves against my scary, black, unarmed son, a large segment of society will assume he deserved to die.
That’s what troubles me so much about the Michael Brown case. His death is tragic, but it’s the reaction to his death that makes me afraid for my son. When I see a story about people raising money for the officer that shot him, I get physically sick. When I hear people arguing about whether the victim was a shoplifter – as though that’s a reason to put six bullets into his body – I have to turn off the news. And when people who I know and like and respect can’t seem to see how this entire conversation would be different if it were a white teenager who was killed, I turn speechless.
Right now, my son knows nothing of race. If you ask him what color Mommy and Daddy are, he’ll say “green” or “orange” or “blue,” naming the color of whatever shirts we’re wearing. But if nothing changes, it won’t be long before we have to sit him down for a conversation that I dread: the one where we tell him that the rules may be different for him than for his white friends; the one where we tell him that, if the cops bust him and his buddies for smoking pot, he can’t count on being treated the same as everybody else; the one where we tell him that white kids generally don’t get shot just because they’re not perfect citizens, but black kids sometimes do.
This conversation is part of the reason why, before my son was born, I hoped he’d be a girl. I’ve never been a black man in America, and I can’t tell him what it’s like. I do know that much of society is still terrified of black males. But I also know that my son’s blackness really only presents a danger to himself. The more he looks like his father, the safer he’s going to be.