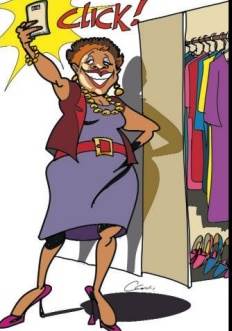 A domestic helper from Clarendon is now in police custody after photographs of her wearing designer clothes and shoes she allegedly stole from her boss, a well-known Kingston businesswoman, were seen on Facebook.
Thirty-two-year-old Sheryl Evans of Frankfield is accused of stealing almost $3 million worth of goods, including designer bags and shoes, from her employer.
It is also alleged that Evans decorated her kitchen and living room with kitchen ware and ceramic vases that she stole, took pictures of them and posted them on the popular social networking website.
Evans, who was employed to the complainant for 10 years, reportedly stole the goods over a three-year period.
The goods, which are valued at US$27,500, include articles of clothing, kitchen, living room, and bedroom sets, small electronic devices, gold and diamond jewellery and accessories.
Custom-made shoes, Gucci and Ralph Lauren sheet sets, Alexander McQueen shoes, Gucci handbags, Armani sandals and Macy’s hand-decorated plates were also listed among the stolen items.
The accused woman was arrested on July 17 after her house was searched and almost $2 million worth of the goods reportedly recovered in used or damaged state.
The complainant, who had been missing her goods for a while, became suspicious of Evans after she returned a pair of custom-made gold shoes that were missing.
It is reported that the complainant discovered the pair of shoes missing in July and asked Evans and other workers about it, but they all denied seeing it. However, it is reported that Evans later returned the shoes to the complainant and told her that she had borrowed them to wear to her son’s graduation.
The complainant became even more suspicious of Evans and reported the matter to the police, who obtained a warrant to search Evans’ home.
The police also viewed Evans’ Facebook profile, which has since been deactivated, which had photographs of her in several pieces of clothing that were identified by the complainant.
The police alleged that Evans also had photographs on Facebook of the stolen hand-decorated plates and wine glasses that she used to adorn her kitchen.
It is further reported that her son was also photographed wearing a hat and articles of clothing belonging to the complainant’s son.
Evans was subsequently charged with embezzlement and when cautioned she allegedly told the police, “Fi tell you di truth, a red-eye mi red-eye, bad mind and greedy because Ms … pay mi good and treat mi good.”
However, the accused woman, who was released on station bail, was taken back into custody on July 30 after she was unable to satisfy conditions of her bail.
Magistrate Georgianna Fraser ordered Evans to surrender her travel documents and imposed a curfew order and reporting conditions after she was told by the investigating officer that the accused was planning to flee the country.
Evans subsequently surrendered a cancelled passport, but failed to surrender another passport which she reportedly has, and is being kept in custody.
Her matter will be mentioned on August 20.
ADVERTISEMENT