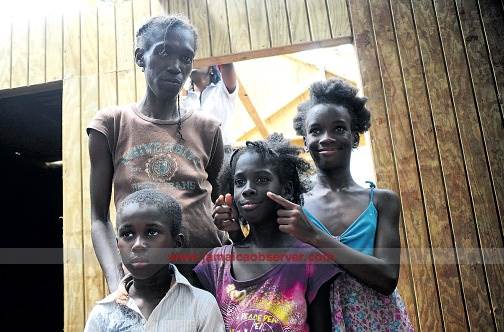 FOOD For the Poor (FFP) has completed construction of a house for street sweeper Peaches Henry whose plight was highlighted in the Jamaica Observer on March 1.

“I am very grateful for the help that Food for the Poor and the Jamaica Observer have provided. If it was not for these organisations and the help of concerned citizens, I don’t know what I would do,” said the 38-year-old single mother.

She made the comment as a team from FFP spent a day constructing the two-bedroom for her and her children.

Three of the street sweeper’s five children, who were on hand to witness the construction, celebrated and cheered as FFP employers carried out their work.

Several of Jamaican’s top entertainers, including Assassin and members of No Madzz group were also on hand to help. Members from the Observer’s marketing team also provided assistance.

“We want to thank the Observer; they were the ones who featured the story about Peaches and, because of that, we got the funding to build the home,” said Marsha Burrell, marketing manager at FFP.

According to Burrell the house was built under the FFP’s ‘5K Run’ initiative, which is scheduled for May 9.

“Our aim is to build 300 homes under our FFP 5K run, and the house constructed for Peaches was one from that list,” Burrell emphasised.

Meanwhile, the Observer team was elated to be a part of the initiative.

“This particular initiative started with, of course, the story that was written but, as a corporate entity, the Observer didn’t want to just leave it at that; we wanted our team to actually come and see it come to fruition,” said assistant manager of marketing and communications at Observer, Pamille Shaw-Blair.

“Partnering with FFP was important to us as well because we are always seeing how much a change agent they are and when we put the two companies together its really a synergy,” said Shaw-Blair.