FROM BARBER TO TEACHER OF THE YEAR

Former barber, factory worker is Maths Teacher of the Year 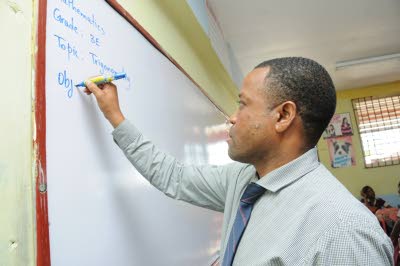 The Ministry of Education’s Maths Teacher of the Year Oneal McLeod, sets out the objectives of his trigonometry lesson for the day.JNBS

ASK any student from third to fifth form at Godfrey Stewart High School in Savanna-la-Mar, Westmoreland, about a teacher they know as Mr McLeod and you’ll hear how he makes the subject of mathematics easy and relatable.

“When he’s teaching maths he makes it simple because he relates it to things you know,” says Cammelo White a fourth former.

Another fourth former, Carl Russell, says: “Say, for example, ratios and substitution, Sir. He uses football to help you to understand the concept.”

“He just makes it easy,” chimes in Rick Bedassie, also a fourth former.

And the comments from teachers are not very different.
“He’s so creative when bringing across maths concepts. The situations he uses are phenomenal. I don’t know how he comes up with those ideas, but when you share those ideas with the students it allows them to appreciate the concepts more,” says colleague maths teacher and protÃ©gÃ©, Shantoya Beckford Tomlinson. She has been teaching at Godfrey Stewart for only two months and is in awe of Mr Mcleod and his teaching methodologies.

With such glowing tributes, it’s a little difficult to believe that Oneal McLeod, who won the Jamaica National Building Society-sponsored 2016 National Mathematics Teacher of the Year award on March 8, had no interest in education, neither as a student nor educator, up to age 28. As a high school student, most of his days at Frome Technical High School were spent leisurely playing football, and he left that school without a single pass in any external examination. Neither did he acquire a skill.

With limited job opportunities, he took up barbering on his veranda to earn a living.

“I grew up in a poor family, with four siblings in Frome,” he says, recounting his days in the rural district in the centre of the sugar belt of Westmoreland, about six miles from the parish capital, Savanna-la-Mar.

“My mother used to sell at the school gate and I really didn’t have anyone to motivate me. It was just going to school because your parents sent you to school,” he tells the

But an opportunity at the Frome Sugar Company provided the environment for him to think differently. The current head of Godfrey Stewart High School’s Maths Department worked at the sugar factory for 10 years, starting as a sample bagger, being promoted to core operator, and then to assistant analyst. Eventually, he was appointed ticketing clerk. However, the work was tedious, he recalls, and although he lobbied for an increase in his salary, none was forthcoming.

“My supervisor, Mr Rohan Robinson, used to encourage me and tell me that I have potential and that I should go back to school, but I still never really paid attention to that because at my age going back to school never made sense to me,” he says. He was in his late 20s at the time.

Then one day he was sent off to the University of Technology for a workshop, where he saw something that sparked his interest and caused him to consider furthering his education.

“I remember one day I was near to the auditorium and I saw persons who looked like they worked in banks and I wondered if it was a function. Then I realised it was an exam, and I said to myself: ‘Here am I, without any education, and here are these people who look like professionals, and they are actually furthering their education’.” McLeod recounts.

With that in mind, and prodding from his wife, Donna, McLeod resolved in 2003 that he would attempt to sit a few subjects, starting with English language. He sat, but failed and became de-motivated.

“My teacher at the time, she called and she asked me what was my grade and I told her grade four and she said she was expecting me to get a grade one. And she motivated me and said, ‘Go back and try it. Don’t wait,” he relates.

On his second attempt, McLeod received a grade two. He set maths as his next hurdle.

People told me, ‘Don’t try it, it’s too hard’, but I had already registered. So, I said, let me go to the class, and I found it interesting despite being at the bottom of the class,” he says.

“I was the slowest. I couldn’t retain anything. However, I had friends who would help me and every time I got over a hurdle, the joy that it would bring…and I realised that if I wanted to do well I just had to practise.”

McLeod moved from being the slowest, to having his teacher ask to teach the class sometimes.

In 2005, he achieved a distinction in maths and took on three other subjects: principles of accounting, principles of business and human and social biology. He passed those with a distinction and two credits. He now had five Caribbean Secondary Education Certificate subjects, all achieved while continuing to work nights at Frome, and teaching maths part-time.

The knowledge he was gaining made him hungry for more, and McLeod decided that higher education would be his next goal. In 2009, after receiving a pay-out from the sugar factory, he enrolled at Sam Sharpe Teachers’ College in Montego Bay, St James. He graduated three years later with specialisations in mathematics and science education.

He next objective was finding a school to ply his trade. As he searched, he vowed that there were two schools he would never consider. Godrey Stewart, which was beset with behavioural challenges and had a poor reputation as a result, was one of them.

But McLeod was in for a pleasant surprise when he attended a workshop at the institution with his mentor and lecturer, Donovan Doyley. He had been unaware of the transformation the school had undergone from participating in the five-year intensive Centres of Excellence programme by the Jamaica National Building Society and The Victoria Building Society.

“When I went to the workshop, the students were well-behaved and I was in awe. [I asked myself:] ‘Is this really Godfrey Stewart that persons always have so many negative things to talk about?’ And, I began to change my mind,” he tells Career & Education.

He applied for a position in 2012, was accepted, and one year later, was promoted to head of the Mathematics Department.

Since his advent, student performance in maths has improved dramatically. In his first year, the number of passes increased from 17 to 41 students, adding something to the mix that the school had never achieved before — distinctions. And not just one, but six! The numbers rose to 96 students two years later, and McLeod is now working to move the passes from the current 40 per cent of the fifth-form cohort to 204 passes, which is 80 per cent of the cohort.

“Students from the Manning’s School in the past never even wanted to look over here. Now all the schools in the parish are coming here, because they want Mr McLeod and our teachers to teach them,” Principal Theobold Fearon states, noting that with Mr McLeod’s intervention, Godfrey Stewart was being positioned to become the “maths centre of Westmoreland”.

“We’ve grown so much that next year we’re going to recommend another teacher for the Mathematics Teacher of the Year Award,” Fearon says. “We’re already on our way to being the centre for maths in Westmoreland, and we want to be recognised throughout Jamaica as the school where students perform extremely well in mathematics,” he declares.

6 thoughts on “FROM BARBER TO TEACHER OF THE YEAR”