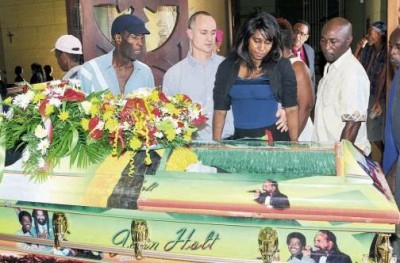 THE music of celebrated reggae act John Holt reverberated throughout the double domes of the historic Holy Trinity Cathedral in downtown Kingston yesterday, as singers and players of instruments paid tribute to their departed colleague.
For well over an hour preceding the service, a number of artistes performed songs made popular by Holt.
Flash bulbs popped and cameras clicked as members of the congregation sought to capture the moments for posterity.
The euphoria rose to fever pitch when renowned toaster Daddy U-Roy delivered Wear You To The Ball in his inimitable style [chicka-bow], While Holt’s sons — Junior and Richard — held the full attention of the congregation when they delivered A Love I Can Feel and Stealing, respectively.
Songbird Karen Smith got the ‘show’ rolling with Memories By The Score, The Silvertones delivered One More Box of Hops, Hezron interpreted The Tide is High, Tinga Stewart paid tribute with Strange Things Happening, while Boris Gardiner was smooth dropping The Smile You Got.
But there was more to come as George Nooks would deliver a pulsating rendition of Left With a Broken Heart and Luciano was in fine form with Impossible.
More music would be incorporated into the service as Carlene Davis and Ken Boothe delivered a touching rendition of Lord Help Me Jesus and Karen Smith would return for a stirring performance of The Holy City.
The music aside, family members and associates paid tribute to 69-year-old Holt who died in London on October 20.
Among those remembering Holt were his daughters — Natalie and Debbie — who recalled halcyon days with their father, his good nature and the joy his music brought him.
A choked-up Debbie noted: “My father enjoyed his life most when he was among the people, performing for the people.” Natalie urged her family and the legion of John Holt fans worldwide to look to her father’s discography and learn from his message of love.
Former manager and booking agent for Holt, Copeland Forbes also spoke about the message of love which permeated Holt’s music.
“I grew to not only know his music but also the man. I found that the message in his music was also part of his spirit,” said Forbes.
Opposition Spokesman on Culture Olivia ‘Babsy’ Grange earned the applause of the sizeable congregation which turned out for the mid-morning farewell.
Grange styled Holt as a master of his craft who won the respect of music experts worldwide.
“He was no ordinary Jamaican. He was part of that set of Jamaicans who have distinguished themselves. We have such an impressive list that we often become nonchalant with how we treat these gifts. They deserve much more than compensation,” she charged.
Culture minister Lisa Hanna was absent and her message was read by executive director of the Jamaica Cultural Development Commission Delroy Gordon.
As the casket, palled in white, stood at the altar, Minister Junior Tucker in delivering the homily drew parallels in the lives of the two Johns — John the Baptist and John Holt. He noted that they both stood up for what they believed in and charged the congregation to do the same. “What will your legacy be when you have departed this Earth? he asked.
Holt, who was interred at the Dovecot Memorial Park in St Catherine, is survived by his widow Merle, children, grandchildren, a great-grandson, siblings, a number of relatives, and fans worldwide.