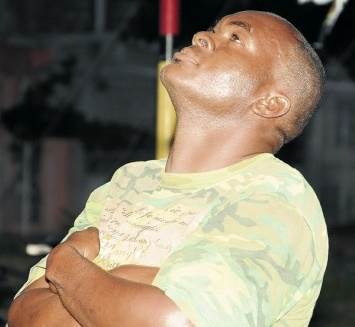 WATERFORD, Portmore — Dwayne Hibbert was in a joyful mood hours before the Vybz Kartel verdict was handed down in the Supreme Court yesterday.

Hibbert, a resident of the section of Waterford called ‘Gaza’, where Kartel has had considerable influence, moved around happily as he flashed the Gaza strip ‘W’ on his fingers, predicting that there would have been a not guilty verdict for his hero Kartel, who is also known in that tough section of the Portmore municipality as the ‘World Boss’.

Hibbert, apparently enjoying the moment as the cameras focussed on him, took reporters on a tour of the section of Waterford where Kartel, whose real name is Adidja Palmer, lived.

Just over an hour after the tour, Hibbert began singing “Free World Boss”, again flashing his ‘W’ as the verdict was being announced. Cameras trained on him, he carried on until a reporter told him “It’s guilty, eno”. His countenance immediately changed, and so too the mood of the other people who had gathered and were optimistic that their ‘godfather’ would be freed of murder.

Those gathered around radios as they listened to the report from the Supreme Court seemed crestfallen. They said nothing for a while, trying to make sense of the news. “Send in the children,” one man said in a serious tone. His order was immediately obeyed.

Police, aware of Kartel’s influence in that section of Waterford, maintained their presence in the community.

Hibbert, lingering in the general area, was seen slumped against a shop made of a shipping container with his hands on his head, looking close to tears. His hands then fell limp to his side and he trained his head skyward as if asking God why.

“Mi caan believe,” he moaned. “Kartel a mi deejay. Gaza fi life. Him have him youth and babymother to take care of. Dem sink the deejay.”

Long faces could be seen all over in the community as people spoke in hushed tones.

“He never did anything wrong,” said a woman who gave her name as ‘Gaza Too Sweet’.

“The Bible said if yu right hand offends you, cut it off,” she said, but did not explain what she meant by

Another woman, who refused to give her name, said that Kartel should have been given a chance because he didn’t kill anyone who belonged in the upper echelon of society.

The police came under verbal assault from female residents who jeered them when they instructed the crowd to leave the road and go home.

Earlier, as children bearing placard and shouting “Free world boss” converged on Chantilly Road where Kartel once lived, the police warned that the kids would be taken and their parents called to account.

The first radio announcement that the verdict was 10-1, without saying what the verdict was, caused some confusion among the Waterford residents, but they remained confident and continued their intermittent chant of ‘Free world boss’.

An elderly woman, who gave her name as Hope, stood by watching her crestfallen neighbour. She, too, seemed broken. “I thought he was going to get a second chance,” she said after the jurors had returned for further deliberation. Their hopes were, however, dashed as they painfully listened to the guilty verdict against Kartel and three of his co-accused.