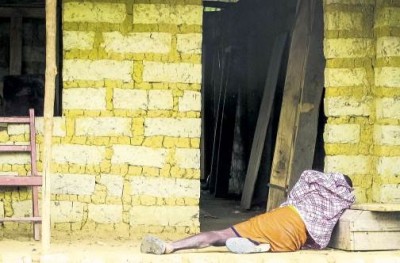 GENEVA, Switzerland (AFP) — The death toll in the world’s worst-ever Ebola outbreak has edged closer to 4,900, while almost 10,000 people have now been infected, new figures from the World Health Organisation (WHO) showed yesterday.
In its latest update, the UN health agency said as of October 19, 4,877 people had died of Ebola out of a total of 9,936 cases registered in seven countries.
The previous WHO toll, running to October 14, had shown 4,555 deaths out of 9,216 registered cases.
The WHO has repeatedly underlined that substantial increases in the number of registered deaths and cases do not mean that they have surged over the period in question.
Instead, they reflect delayed counting, given the extremely difficult conditions in the hard-hit west African nations.
Worst hit countries
The WHO splits the seven affected countries into two groups, with the first comprised of Guinea, Liberia and Sierra Leone — by far the worst hit nations.
Liberia is the worst of all, with 4,665 cases of Ebola and 2,705 deaths.
Sierra Leone’s tally is 3,706 cases, of which 1,259 have been fatal.
Guinea, where the epidemic began in December, has seen 1,540 cases and 904 deaths.
Less affected countries
The second group counts countries with far fewer cases, including Senegal and Nigeria, which were declared Ebola-free by the WHO on Friday and Monday, respectively.
That declaration could
be made because the benchmark of 42 days — two 21-day periods of virus incubation — had passed without any new cases.
Both Senegal and Nigeria have been praised by the WHO for their rapid fightback against Ebola.
Senegal’s single, non-fatal Ebola case was in August.
Nigeria saw 20 cases, including eight deaths.
The second group now also includes Spain, where a nurse was confirmed to have caught the disease from a patient she cared for, a missionary who died from Ebola after returning from Liberia.
After receiving treatment, the nurse has twice tested negative for Ebola, with the most recent result on Tuesday, the WHO noted.
Spain will therefore be declared Ebola-free if there are no new cases over the next 42 days, it added.
The second group also counts the United States, where two nurses have fallen ill after caring for a Liberian man, Thomas Eric Duncan, who died on October 8 after becoming the first Ebola case diagnosed in the US.