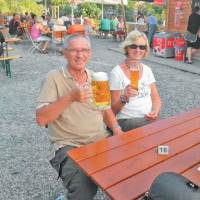 The Trinidad Express reports that
An elderly German couple who have been com­ing to vacation in Toba­go for several years were found hacked to death along Minis­ter’s Bay, Bacolet Beach, yesterday morning.
Tobago police were alerted to the gruesome disco­very around 10 a.m. by two people who were walking along the beach.
Retired German couple Birgid and Hubertus Keil were found chopped to death, metres apart.
Police are yet to confirm a motive for Tobago’s latest tragedy as all items at the couple’s home, located in
Bac­o­let Crescent, were untouched.
Police officials visited the couple’s residence following the discovery of their bodies.
The husband was said to be in his 70s and his wife in her 60s.
Officers said two people stumbled on the body of Birgid Keil and called for help.
When officers arrived and were about to leave the scene around 12.30 p.m., the body of her husband, Hubertus Keil, was discovered some 400 feet (122 metres) away from the woman.
Both bodies bore gaping chop wounds to the back of their necks.
A defensive wound was also
observed on the left hand of Keil, sug­ges­ting he may have struggled with his attacker.
Police suspect the bodies may have been on the beach for one or two days.
The couple arrived in Tobago three weeks ago.
Neighbours said they usually visited the island every October and vacationed on the island until March.
Officers had no motive for the killings as the cou­ple’s house keys and cellu­lar phones were found on them.
The bodies were positively iden­ti­fied by property manager Brian Abraham.
District Medical Officer of Health Dr Leslie Garbar ordered the bodies removed to the Scarborough mor­tuary.
An autopsy is to be performed to determine the cause of death. Scar­borough homicide investigators are continuing investigations.
The killings put Tobago’s murder toll at seven for
the year so far.
The couple’s house is within walk­ing distance of the Bacolet home that belonged to Peter and Murium Green, who were chopped viciously on August 1, 2009.
The Greens recovered after ex­tensive sur­gery and have not returned to Tobago.
Police said one possibility was that the man who attacked
the Greens may also have been responsible for the attack on the German couple.
Contacted for a comment on the matter yesterday, Peter Green said he and his wife were made aware of the double murder.
“It has come at a time when we were getting ready to make state­ments about our attack,” Peter Green said.
In an immediate response to the couple’s deaths, rep­re­sentative for the largest German tour operator Patrick Dankou said yesterday he learned of the incident when the Sun­day Express contacted him.
Dankou said he was in a state of shock and disbelief.
“After years of incidents, Tobago has since seen a recovery in inter­na­tional arrivals. This will have a serious impact on international arrivals to Tobago, especially for the upcoming bumper season previously projected. Some cancellations might be forthcoming. All information on the attack of these visitors must be investigated thoroughly,” Dankou said.