A biochemist and molecular toxicology expert, Professor Ebenezer Farombi has said that ginger was much more than a spice that adds taste to foods, but one that is also protective against colon cancer.

Professor Farombi spoke at the fifth Unibadan Conference of Biomedical Research with the theme “Biotechnology for Health and Sustainable Development”.

Farombi, a Professor of Biochemistry and Molecular Toxicology at the University of Ibadan, stated that researchers have shown ginger to contain chemical substances that can help to reverse, mitigate or abrogate stages of cancer development. 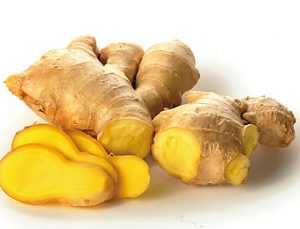 The expert, saying that man is still losing the war on cancer and that its prevention remains the best option, described ginger as a chemo preventive agent to be tapped into in stemming increasing cases of cancer.

The use of such naturally occurring substances as chemo-preventive agents, he said can help reverse, mitigate or abrogate cancer at its different stages of development; adding that many people were not aware of the health benefits of this spice.

The expert linked ginger’s cancer protective benefits to substances in it that has anti inflammatory and antioxidant properties, two conditions that activate processes that can lead to cancer.

Farombi declared that use of chemopreventive agents like ginger had become imperative because more and more people are getting exposed to things that predisposes to cancer.

The expert, who mentioned Roselle (Hibiscus sabdariffa or zobo) and fruits also as help for cancer prevention, stated that gingerol-6 a substance in ginger also protects against colitis-associated colon cancer.

“Studies have shown gingerol-6 anti inflammation and oxidative stress effect to be comparable to that of conventional drugs and as such qualify as a new product for chemo-prevention of colon cancer.

“If a person is to develop cancer at the age of 30 and such starts to take such a chemo-preventive agent, then longevity can be ensured and shifted to say 80 or 90 years. This is what chemo-prevention is all about.”

Also, Dr Mayokun Olajide, a pharmacologist at the University of Huddersfield, United Kingdom, speaking on natural products, drug discovery in Nigeria and issues around it, emphasised the need for a paradigm shift from identifying active ingredients from plants in drug discovery to that driven by molecular biology.

Given that extracts of natural products cannot be patented but can only serve as a lead to developing newer drugs, he said the knowledge of molecular biology is imperative in the discovery of new drug.

“It has taken us from a situation of groping in the dark; now we try to understand what we are dealing with by targeting the problem at its root,” he said.

Olajide also canvassed scientists putting more efforts at drug repurposing, which he said was also an aspect of drug development that entails looking for new ways of using an old drug to treat different health problem.

He cited the use of anti-malarial drugs like Artemisinin that had been rediscovered useful in the management of Alzheimer’s disease.

Olajide, who also mentioned pomegranate fruit as helpful in preventing neurodegenerative diseases like Alzheimer’s disease, said getting new drug leads from natural product through research in Nigeria had many challenges.

While researchers can deal with such challenges as low yield and, seasonal and environmental variation of natural product extract on their own, he urged that government tackle others such as funding, policy, poor infrastructure, inadequate skill and competency to develop natural products drug discovery.

Olajide also stressed team work as important in new drug discovery as well as the academia-industry partnership, saying such a partnership would also help to drive product-oriented research.

Cancer is one of humankind’s greatest modern scourges. However, there are several studies that have shown that an all-natural remedy made of ginger root could be more effective against certain types of cancer than more harmful interventions like chemotherapy and radiation.

In 2007, the BMC Complementary and Alternative Medicine published a study that demonstrated ginger’s ability to combat ovarian cancer, which is the most deadly cancer of the female reproductive system. The ginger works by blocking the cancer from growing, limiting its ability to spread.

Another study from the University of Michigan Comprehensive Cancer Centre discovered that ginger actually caused the death of ovarian cancer cells in a laboratory. Since cancer that is treated with chemotherapy has a tendency to recur and can build up resistance to it over time. If ginger can kill the cancer outright, then that’s a far better solution.

In addition, another study published in the British Journal of Nutrition in 2012 found that ginger also shows extraordinary effects against prostate cancer, a leading cancer in men.

One thought on “GINGER FOR COLON CANCER”