GIRLS 7&8 WERE SUICIDE BOMBERS IN NIGERIA

A pair of girls, believed to be aged between 7 and 8, blew themselves up in a bustling northeastern Nigerian market in Maiduguri, killing themselves and injuring at least 17 others, according to a local official and a militia member.
The attack carried out by the two suicide bombers killed at least three people, according to state emergency agency NEMA spokesman, Sani Datti, who spoke to Reuters. The locals told the news agency that up to nine people died.

A local militia member, Abdulkarim Jabo, told AFP he saw the girls seconds before the explosion.

“They got out of a rickshaw and walked right in front of me without showing the slightest sign of emotion,” he said. “I tried to speak with one of them, in Hausa and in English, but she didn’t answer. I thought they were looking for their mother.”

One of the girls “headed toward the poultry sellers, and then detonated her explosives belt.”

The suicide bombers were as young as “seven or eight,” Jabo said.

The attack was not immediately claimed by IS-affiliated Boko Haram, notorious for its signature strategy of kidnapping girls, but bore all the hallmarks of the terrorists. 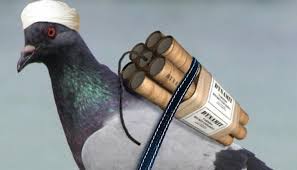 Maiduguri, the capital and largest city of Borno State, is the epicenter of the Boko Haram insurgency. One of the deadliest terrorist groups in the world, they are responsible for 5,478 deaths in 2015, surpassed only by Islamic State (IS, formerly ISIS/ISIL), according to the new Global Terrorism Index.

On Friday, two women carried out suicide bombings at a crowded market in Madagali, killing at least 30 people and injuring 67, AP reported.

More than “1.3 million children have been uprooted by Boko Haram-related violence,” according to the UN children’s agency (UNICEF).

A Finn Church Aid report, based on interviews with 119 former Boko Haram members, recently found that female members of the terrorist group are almost as likely as men to be deployed as fighters.

“This large role of women in Boko Haram was one of the most surprising results we got,” Mahdi Abdile, director of research at Finn Church Aid and co-author of the study, said in the report. “For example, in [Al-Qaeda-linked] Al Shabab, women basically do not have an active role at all,” he added.

Boko Haram has killed about 20,000 people and displaced more than 2.5 million in Nigeria in a seven-year insurgency, according to AP