Sophia Afflick once lived in a chicken coop in St Thomas with her children. She had moved from her house in Commodore, Portland after she was diagnosed with hyperthyroidism in 2010.

“I fell in a serious case of depression. I wanted to lay down everyday and I felt like committing suicide and I never wanted to be around my children. I was diagnosed with hyperthyroidism at Princess Margaret Hospital in St Thomas, and my sister was living in that parish, so I decided that it was best to move there for treatment,” Afflick said.

Having journeyed to St Thomas to stay in a two-bedroom house with one of her sisters, Afflick said she became very uncomfortable.

“Sometimes, I sleep on di sofa so that mi two daughters could share a bed with my sister’s children. It was really stressing for us. We needed our own space,” she further stated.

After a while, Afflick said she and her sister started experiencing conflicts, so she left.

“There was an abandoned fowl coop in the yard and things became so desperate that I decided to fix it up as best as I could and live in it. We neva have no furniture. All I had was two baskets with clothes fi me and di children with one small table and a second-hand mattress. That’s all we had, but we felt safe and we had more peace of mind,” Afflick said.

But the nightmare and horror of being near-homeless ended when Jamaican sprinter Yohan Blake teamed up with charitable organisation Food For The Poor (FFP) and provided her with a new two-bedroom house in August 2015.

“Where I was, I didn’t know that things would turn around for me. Maybe I would have died, but I am a survivor today because of Yohan Blake and Food For The Poor,” she said.

Prior to Blake and FFP’s intervention, Afflick was near destitute and prayed for a Samaritan to rescue her. 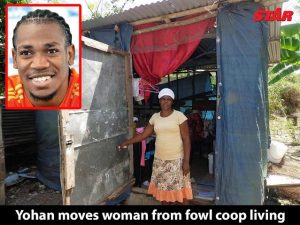 “When mi get the keys in my hand, it was like mi just wake up out of a nightmare. Mi couldn’t stop crying. Then mi 16-year-old daughter come back home to live wid us. I was so happy. In fact, mi even start feel much better with my health. It’s almost like mi forget that I had the health problems.”

Blake and FFP have teamed up once more with the sprinter pledging to again donate towards the building of a house for a needy Jamaican. Blake will donate US$3,200 (J$393,000) towards the buiding of a two-bedroom house, and FFP will be putting up a similar amount.

“I want to help people to live better and we’ll have more fulfilling lives in our society. Having a house to call your home provides a sense of pride and dignity,” Blake said recently. “I promise that as long as I am able to help another person, I will. God has been good to me, and He has blessed me beyond measure.”

FFP Jamaica will be using the funds from its 5K Run/Walk this Saturday in Kingston, to provide housing for needy families.