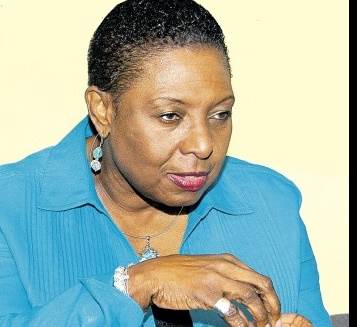 OPPOSITION Spokesperson on Youth, Culture and Entertainment Olivia “Babsy” Grange has called on government to amend legislation to decriminalise possession of small amounts of ganja and to expunge the records of those persons, including artistes, who have been convicted for having a ‘spliff’.
Grange said that during recent discussions with a number of individuals in the music industry as well as young persons from various communities on different matters affecting them, she was again faced with how many lives are being affected by government’s delay in decriminalising possession of small amounts of marijuana.
According to Grange, the former administration had already started the process.
“A Cabinet decision had been taken and a Ministry Paper tabled in Parliament proposing to, through legislation, decriminalise possession of small amounts, and to expunge records of those persons previously convicted of such possession. After almost three years in office, when public and international attitudes have become even more supportive of the idea, the present administration continues to drag its feet,” Grange said.
She further pointed out that while the government delays in making changes to legislation, each week hundreds are locked up, prosecuted and fingerprinted for what is in essence, a victimless crime. “They are left with criminal records which define and constrain their entire potential,” she said.
“The horrible irony is that when they can’t get jobs, it adds to rising levels of unemployment and makes them even more susceptible to engaging in criminal activities,” she said, adding that the time had long come to change that.
Grange said she is of the understanding that magistrates can use their discretion regarding fingerprinting, and asked whether in these changing times, and pending new legislation, they might not apply a different context when deciding whether or not to fingerprint individuals for possession of small amounts of ganja.
“My focus, in urging the government to act now, is on the damage to the potential of young persons, most of whom are poor and from the inner cities. We must take every opportunity to reduce their marginalisation, and to create opportunities for employment. This issue also specifically affects young artistes who by reason of being caught with a single spliff find themselves unable to get a visa to travel and grow their careers, ” she argued.

112 Users Online
Back to top